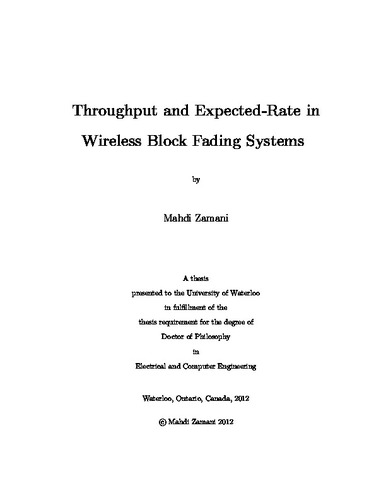 This thesis deals with wireless channels in uncorrelated block fading environment with Rayleigh distribution. All nodes are assumed to be oblivious to their forward channel gains; however, they have perfect information about their backward channel gains. We also assume a stringent decoding delay constraint of one fading block that makes the definition of ergodic (Shannon) capacity meaningless. In this thesis, we focus on two different systems. In each case, the throughput and expected-rate are analyzed. First, the point-to-point multiple-antenna channel is investigated in chapter 2. We prove that in multiple-input single-output (MISO) channels, the optimum transmission strategy maximizing the throughput is to use all available antennas and perform equal power allocation with uncorrelated signals. Furthermore, to increase the expected-rate, multilayer coding (the broadcast approach) is applied. Analogously, we establish that sending uncorrelated signals and performing equal power allocation across all available antennas at each layer is optimum. A closed form expression for the maximum continuous-layer expected-rate of MISO channels is also obtained. Moreover, we investigate multiple-input multiple-output (MIMO) channels, and formulate the maximum throughput in the asymptotically low and high SNR regimes and also asymptotically large number of transmit or receive antennas by obtaining the optimum transmit covariance matrix. Furthermore, a distributed antenna system, wherein two single-antenna transmitters want to transmit a common message to a single-antenna receiver, is considered. It is shown that this system has the same outage probability and hence, throughput and expected-rate, as a point-to-point 2x1 MISO channel. In chapter 3, the problem of dual-hop transmission from a single-antenna source to a single-antenna destination via two parallel full-duplex single-antenna relays under the above assumptions is investigated. The focus of this chapter is on simple, efficient, and practical relaying schemes to increase the throughput and expected-rate at the destination. For this purpose, various combinations of relaying protocols and multi-layer coding are proposed. For the decode-forward (DF) relaying, the maximum finite-layer expected-rate as well as two upper-bounds on the continuous-layer expected-rate are obtained. The main feature of the proposed DF scheme is that the layers being decoded at both relays are added coherently at the destination although each relay has no information about the number of layers being successfully decoded by the other relay. It is proved that the optimum coding scheme is transmitting uncorrelated signals via the relays. Next, the maximum expected-rate of ON/OFF based amplify-forward (AF) relaying is analytically formulated. For further performance improvement, a hybrid decode-amplify-forward (DAF) relaying strategy, adopting multi-layer coding at the source and relays, is proposed and its maximum throughput and finite-layer expected-rate are presented. Moreover, the maximum throughput and expected-rate in the compress-forward (CF) relaying adopting multi-layer coding, using optimal quantizers and Wyner-Ziv compression at the relays, are fully derived. All theoretical results are illustrated by numerical simulations. As it turns out from the results, when the ratio of the relay power to the source power is high, the CF relaying outperforms DAF (and hence outperforms both DF and AF relaying); otherwise, DAF scheme is superior.