Perspectives on the Formalism of Quantum Theory 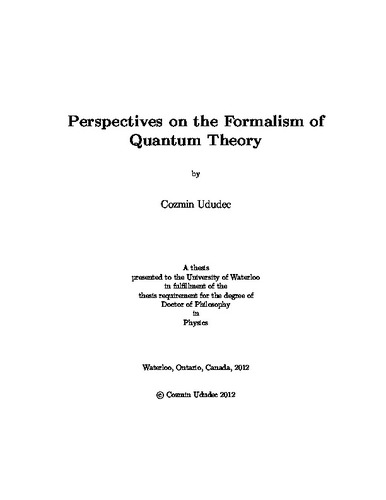 Quantum theory has the distinction among physical theories of currently underpinning most of modern physics, while remaining essentially mysterious, with no general agreement about the nature of its principles or the underlying reality. Recently, the rise of quantum information science has shown that thinking in operational or information-theoretic terms can be extremely enlightening, and that a fruitful direction for understanding quantum theory is to study it in the context of more general probabilistic theories. The framework for such theories will be reviewed in the Chapter Two. In Chapter Three we will study a property of quantum theory called self-duality, which is a correspondence between states and observables. In particular, we will show that self-duality follows from a computational primitive called bit symmetry, which states that every logical bit can be mapped to any other logical bit by a reversible transformation. In Chapter Four we will study a notion of probabilistic interference based on a hierarchy of interference-type experiments involving multiple slits. We characterize theories which do not exhibit interference in experiments with k slits, and give a simple operational interpretation. We also prove a connection between bit symmetric theories which possess certain natural transformations, and those which exhibit at most two-slit interference. In Chapter Five we will focus on reconstructing the algebraic structures of quantum theory. We will show that the closest cousins to standard quantum theory, namely the ﬁnite-dimensional Jordan-algebraic theories, can be characterized by three simple principles: (1) a generalized spectral decomposition, (2) a high degree of symmetry, and (3) a generalization of the von Neumann-Luders projection postulate. Finally, we also show that the absence of three-slit interference may be used as an alternative to the third principle. In Chapter Six, we focus on quantum statistical mechanics and the problem of understanding how its characteristic features can be derived from an exact treatment of the underlying quantum system. Our central assumptions are sufficiently complex dynamics encoded as a condition on the complexity of the eigenvectors of the Hamiltonian, and an information theoretic restriction on measurement resources. We show that for almost all Hamiltonian systems measurement outcome probabilities are indistinguishable from the uniform distribution.