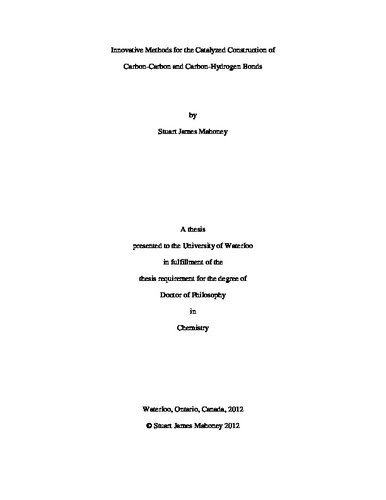 The selective transformation of carbon-carbon and carbon-hydrogen bonds represents an attractive approach and rapidly developing frontier in synthesis. Benefits include step and atom economy, as well as the ubiquitous presence in organic molecules. Advances to this exciting realm of synthesis are described in this thesis with an emphasis on the development of catalytic, selective reactions under mild conditions. Additionally some applications of the methodologies are demonstrated. In Chapter 1, the first examples of inter-and intramolecular enantioselective conjugate alkenylations employing organostannanes are reported. A chiral, cationic Rh(I)-diene complex catalyzed the enantioselective conjugate addition of alkenylstannanes to benzylidene Meldrum’s acids in moderate enantiomeric ratios and yields. Notably, the cationic and anhydrous conditions required for the asymmetric alkenylation are complementary to existing protocols employing other alkenylmetals. In Chapter 2, a domino, one-pot formation of tetracyclic ketones from benzylidene Meldrum’s acids using Sc(OTf)3 via a [1,5]-hydride shift/cyclization/Friedel-Crafts acylation sequence is described. Respectable yields were obtained in accord with the ability to convert to the spiro-intermediate, and considering the formation of three new bonds: one C-H and two C-C bonds. An intriguing carbon-carbon bond cleavage was also serendipitously discovered as part of a competing reaction pathway. In Chapter 3, the pursuit of novel C-H bond transformations led to the development of non-carbonyl-stabilized rhodium carbenoid Csp3-H insertions. This methodology enabled the rapid synthesis of N-fused indolines and related complex heterocycles from N-aziridinylimines. By using a rhodium carboxamidate catalyst, competing processes were minimized and C-H insertions were found to proceed in moderate to high yields. Also disclosed is an expedient total synthesis of (±)-cryptaustoline, a dibenzopyrrocoline alkaloid, which highlights the methodology. In Chapter 4, the Lewis acid promoted substitution of Meldrum’s acid discovered during the course of the domino reaction was explored in detail. The protocol transforms unstrained quaternary and tertiary benzylic Csp3-Csp3 bonds into Csp3-X bonds (X = C, N, H) and has even shown to be advantageous with regards to synthetic utility over the use of alternative leaving groups for substitutions at quaternary benzylic centers. This reaction has a broad scope both in terms of suitable substrates and nucleophiles with good to excellent yields obtained (typically >90%).