Design of a Robust Priming Controller for SMA Actuators 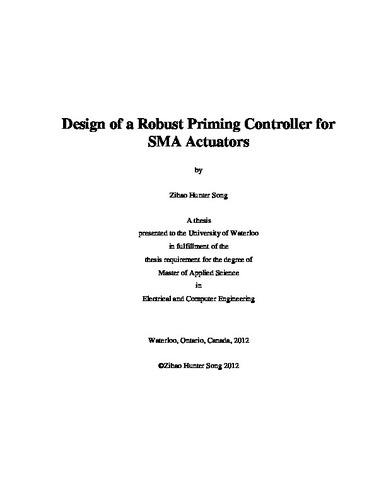 Shape Memory Alloys (SMAs) have been demonstrated to be effective actuator elements in a wide range of applications, such as robotics, medicine, aerospace and automotive. Enabled by the unique thermo-mechanical properties of SMAs, these actuators offer the advantages of light weight, high power-to-weight ratio and a simple actuation mechanism compared to traditional actuator types. At the same time, the widespread adoption of the SMA actuator remains elusive as its low power efficiency and complex hysteretic behaviour often render it an impractical means of actuation. These actuators also exhibit a slow response speed and their response is highly sensitive to changes in the external environment, namely ambient temperature and mechanical stress, thus complicating their control. Position, force or temperature sensors may be used to facilitate feedback control, but at the cost of increasing the overall size and complexity of the system. The difficulties caused by the hysteretic behaviour can be largely avoided when SMA wires are used as on-off actuators, making SMAs well suited for such applications. However, they may still be subject to a wide range of dynamic operating conditions that would impact their actuation time, and achieving a consistent actuation time is often highly desirable. This thesis presents the synthesis of a nitinol SMA actuator control system which uses electrical resistance feedback to enable a fast response speed and robustness to disturbances in the external environment. A study of the resistance behaviour of SMAs is discussed first. The design of an adaptive controller and the experimental evaluation of its performance are described in detail next. The objective of the SMA actuator control system is to achieve a consistent and fast actuation time throughout the range of operating ambient temperature and stress. The control system is implemented experimentally and shown to be quite successful.