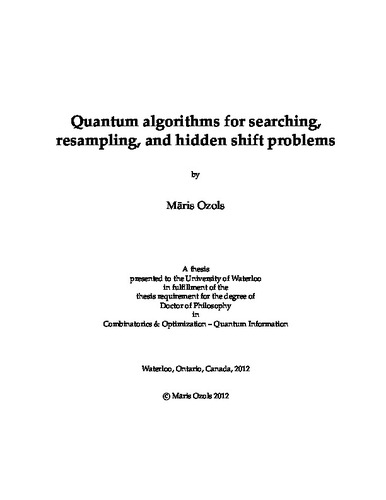 This thesis is on quantum algorithms. It has three main themes: (1) quantum walk based search algorithms, (2) quantum rejection sampling, and (3) the Boolean function hidden shift problem. The first two parts deal with generic techniques for constructing quantum algorithms, and the last part is on quantum algorithms for a specific algebraic problem. In the first part of this thesis we show how certain types of random walk search algorithms can be transformed into quantum algorithms that search quadratically faster. More formally, given a random walk on a graph with an unknown set of marked vertices, we construct a quantum walk that finds a marked vertex in a number of steps that is quadratically smaller than the hitting time of the random walk. The main idea of our approach is to interpolate the random walk from one that does not stop when a marked vertex is found to one that stops. The quantum equivalent of this procedure drives the initial superposition over all vertices to a superposition over marked vertices. We present an adiabatic as well as a circuit version of our algorithm, and apply it to the spatial search problem on the 2D grid. In the second part we study a quantum version of the problem of resampling one probability distribution to another. More formally, given query access to a black box that produces a coherent superposition of unknown quantum states with given amplitudes, the problem is to prepare a coherent superposition of the same states with different specified amplitudes. Our main result is a tight characterization of the number of queries needed for this transformation. By utilizing the symmetries of the problem, we prove a lower bound using a hybrid argument and semidefinite programming. For the matching upper bound we construct a quantum algorithm that generalizes the rejection sampling method first formalized by von~Neumann in~1951. We describe quantum algorithms for the linear equations problem and quantum Metropolis sampling as applications of quantum rejection sampling. In the third part we consider a hidden shift problem for Boolean functions: given oracle access to f(x+s), where f(x) is a known Boolean function, determine the hidden shift s. We construct quantum algorithms for this problem using the "pretty good measurement" and quantum rejection sampling. Both algorithms use the Fourier transform and their complexity can be expressed in terms of the Fourier spectrum of f (in particular, in the second case it relates to "water-filling" of the spectrum). We also construct algorithms for variations of this problem where the task is to verify a given shift or extract only a single bit of information about it.