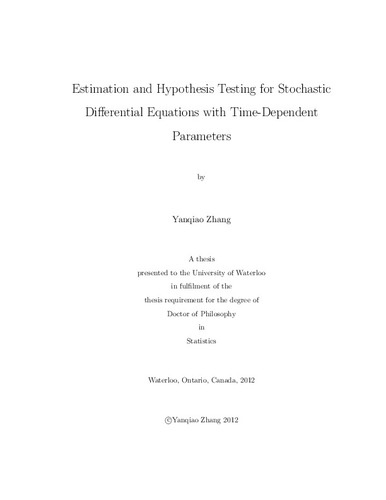 There are two sources of information available in empirical research in finance: one corresponding to historical data and the other to prices currently observed in the markets. When proposing a model, it is desirable to use information from both sources. However in modern finance, where stochastic differential equations have been one of the main modeling tools, the common models are typically different for historical data and for current market data. The former are usually assumed to be time homogeneous, while the latter are typically time in-homogeneous. This practice can be explained by the fact that a time-homogeneous model is stationary and easier to estimate, while time-inhomogeneous model are required in order to replicate market data sufficiently well without creating arbitrage opportunities. In this thesis, we study methods of statistical inference, both parametric and non-parametric, for stochastic differential equations with time-dependent parameters. In the first part, we propose a new class of stochastic differential equation with time-dependent drift and diffusion terms, where some of the parameters change according to a hidden Markov process. We show that under some technical conditions this innovative way of modeling switching times renders the resulting model stationary. We also explore different approaches to estimate parameters in our proposed model. Our simulation studies demonstrate that the parameters of the model can be efficiently estimated by using a version of the filtering method proposed in the literature. We illustrate our model and the proposed estimation method by applying them to interest rate data, and we detect significant time variations in early 1980s, when targets of the monetary policy in the United States were changed. One of the known drawbacks of parametric models is the risk of model misspecification. In the second part of the thesis, we allow the drift to be time-dependent and nonparametric, and our objective is to estimate it using a single trajectory of the process. The main idea underlying this method is to approximate the time-dependent function with a sequence of polynomials. Since we can estimate efficiently only a finite number of parameters for any finite length of data, in our method we propose to relate the number of parameters to the length of the observed trajectory. This idea is similar to the method of sieves proposed by Grenander (Abstract Inference, 1981). The asymptotic analysis that we present is based on the assumption that the length of available data $T$ increases to infinity. We investigate two cases, one is a Brownian motion with time-dependent drift and the other corresponds to a class of mean-reverting stochastic differential equations with time-dependent mean-reversion level. In both cases we prove asymptotic consistency and normality of a modified maximum likelihood estimator of the projected time-dependent component. The main challenge in proving our results in the second case stems from two features of the problem: one is due to the fact that coefficients of projections change with $T$ and the other is related to the confounding effect between the mean-reversion speed and the level function. By applying our method to the same interest rate data we use in the first part, we find another evidence of time-variation in the drift term.