The hydrology of the Bois-des-Bel bog peatland restoration: A tale of two scales 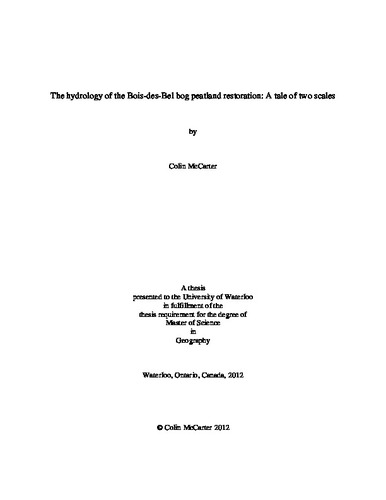 Vacuum harvested peatlands typically do not spontaneously regenerate peatland species and more importantly the peat-forming Sphagnum mosses. Thus harvested and abandoned peatlands require restoration to return the peat-forming Sphagnum moss to the ecosystem. Restoration can create a hydrological environment that is suitable for peatland species’ regeneration and results in substantial Sphagnum moss growth. Bois-des-Bel was restored in the winter of 1999 and studied in the following three years (2000-2002), then again after 10 years (this study). Immediately following restoration the conditions were deemed favourable for Sphagnum regeneration (i.e. soil water pressures and water tables, > -100 cm and -40 cm respectively) (~ 15-20 cm in 10 years), while evaporation from the surface was reduced due to the straw mulch that was applied as part of the restoration measures. Although the hydrological conditions were suitable for peat revegetation, Bois-des-Bel was still a net exporter of carbon during first three years. The purpose of this thesis is to understand the hydrological evolution of Bois-des-Bel since the initial assessments and document the hydrophysical properties that could limit net carbon sequestration. This is done with a combination of field and laboratory (monolith) experiments through comparison of its hydrology and hydraulic parameters to that of a natural reference site. Since the initial assessment a water table rise of ~ 5-10 cm has occurred at the Restored site with an average water table of -27.3 (± 14.9) with respect to the cutover peat (pre-restoration surface) and ~ -42.3 (± 20.9) cm with respect to the regenerated Sphagnum surface. This water table is still much further from the capitula and more variable than at the Natural site (33.2 ± 9.0 cm). Both evapotranspiration (242 mm) and runoff (7 mm) from the Restored site maintained the same relationships in 2010 as during the initial assessments, compared to the Unrestored site (290mm and 37 mm, respectively). Although lower evapotranspiration equated to less water lost from the system, evapotranspiration at the Restored site was not indicative of the Natural site (329 mm), chiefly due to limited surface Sphagnum moisture at the Restored site. After ten years following restoration, the large scale hydrological processes are still controlled by the cutover peat and not the regenerated Sphagnum moss; thus the Restored site is still divergent from the Natural site. Wells paired with the soil moisture measurements resulted in average water tables of -53.7 ± 17.8 cm at the Restored site and -31.9 ± 8.3 cm at the Natural site. In addition to much lower water tables, the upper layers of regenerated Sphagnum (θ2.5 cm – 0.12 and θ7.5 cm – 0.11) on average were far drier than the same species at the Natural site (θ2.5 cm – 0.23 and θ7.5 cm – 0.32) under only Sphagnum. Furthermore the Restored site was very dry just above the cutover peat (θ17.5 cm – 0.19), compared to the same probe depth at the Natural site (0.57). At the Natural site under ericaceous and Sphagnum the soil moisture contents were generally double that of the Sphagnum-only site. In addition to poor soil water retention at the Restored site, high specific yield was observed in the Restored site (0.44) monoliths while the water table fluctuated within the Sphagnum compared to both the Natural (0.10) and Unrestored (0.05) monoliths. These retention characteristics at the Restored site are due to far lower fraction of water filled pores for a given pore diameter than the same species (S. rubellum) at the Natural site. The high abundance of large pores do not generate the necessary capillary force to draw water from the relatively wet cutover peat into the Sphagnum moss, resulting in a capillary barrier. Although after ten years the Restored section of Bois-des-Bel had somewhat representative bog peatland ecology, the hydrological conditions needed for net carbon sequestration were not present. The lack of water transmission from the cutover peat to the regenerated Sphagnum moss due to large pores and the inability of the Sphagnum moss to retain water are both retarding the restoration. For Bois-des-Bel to become a net carbon sequestering further lateral infilling of the Sphagnum leaves and branches along with decomposition of the basal layer will be need. In addition to these two processes, planting of ericaceous shrubs could lower the water loss through evaporation, thus increasing the capitula moisture content and creating healthier mosses. If Bois-des-Bel continues on its current ecohydrological trajectory it is likely that it will self-regulate and make the necessary structural changes to become a net carbon sequestering system.