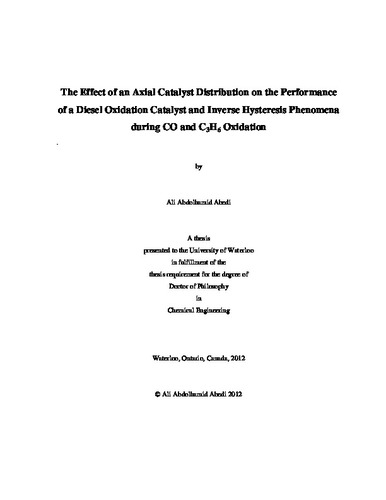 The Diesel Oxidation Catalyst (DOC) is a key component in the exhaust after-treatment system of diesel engines. In this study two aspects of a DOC were investigated: catalyst distribution and reactant species interactions. In the first part, the effect of an axial Pt distribution along a DOC was investigated by comparing a standard sample, with a homogeneous Pt distribution along the length, with a zoned sample, where the Pt was non-homogeneously distributed along the length. Temperature-programmed oxidation (TPO) and spatially-resolved gas-phase concentration measurement experiments were used to compare the CO, C3H6 and NO oxidation performance of the standard and zoned catalysts. Both catalyst types had the same total amount of Pt but different distributions. The zoned catalyst, with more Pt located in the upstream portion, showed better performance than the standard catalyst, especially at high total flow rate and when a mixture of the reactants were used. The superior performance of the zoned sample is due to a larger, localized exotherm in the upstream region, where more Pt is located, and a decrease in the self-poisoning effect downstream, where reaction light-off occurs. In addition, catalyst durability against thermal degradation was tested by exposing the whole catalyst (homogeneous aging) and part of the catalyst (heterogeneous aging) to high temperatures. In general, the zoned catalyst showed better performance than the standard catalyst after thermal aging, especially after heterogeneous aging. The reason for the superior performance of the zoned catalyst, especially after heterogeneous aging, is that the back of the catalyst, which is exposed to higher temperature, contains less Pt than the front; therefore, most of the Pt particles in the zoned catalyst were not affected by thermal aging. However, after homogeneous aging, the performance of the standard catalyst was better than the zoned catalyst at higher flow rate and temperature most likely due to the different sintering rates in the zoned sample compared to the standard one. In the second part of this research, the interactions between CO, C3H6, H2, and NO were tested over a commercial Pt/Al2O3 monolith sample by studying these reactions during ignition and extinction (warm-up and cool-down). Results showed that CO, C3H6, and NO inhibit their own oxidation and each other’s oxidation due to the self-poisoning effect and competitive adsorption over active sites. In the case of a CO + C3H6 mixture, interesting CO and C3H6 oxidation trends were observed during the extinction phase. As the C3H6 concentration increased in the mixture, the catalytic activity of CO oxidation during the extinction phase decreased until it was actually poorer than that during the ignition phase. In situ diffuse reflectance infrared Fourier transform spectroscopy (DRIFTS) showed different C3H6 oxidation intermediates during the extinction phase on the catalyst surface, thus blocking active sites and lowering catalyst activity.

Ali Abedi (2012). The Effect of an Axial Catalyst Distribution on the Performance of a Diesel Oxidation Catalyst and Inverse Hysteresis Phenomena during CO and C3H6 Oxidation. UWSpace. http://hdl.handle.net/10012/6996