Feedback and Cooperation in Wireless Networks 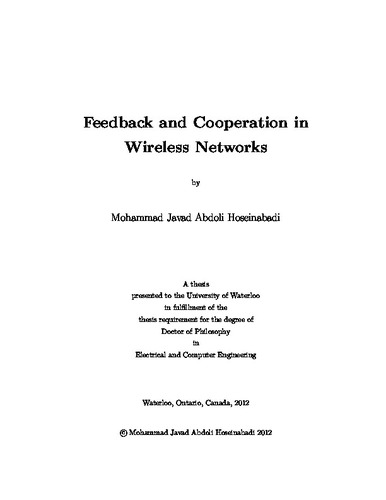 The demand for wireless data services has been dramatically growing over the last decade. This growth has been accompanied by a significant increase in the number of users sharing the same wireless medium, and as a result, interference management has become a hot topic of research in recent years. In this dissertation, we investigate feedback and transmitter cooperation as two closely related tools to manage the interference and achieve high data rates in several wireless networks, focusing on additive white Gaussian noise (AWGN) interference, X, and broadcast channels. We start by a one-to-many network, namely, the three-user multiple-input multiple-output (MIMO) Gaussian broadcast channel, where we assume that the transmitter obtains the channel state information (CSI) through feedback links after a finite delay. We also assume that the feedback delay is greater than the channel coherence time, and thus, the CSI expires prior to being exploited by the transmitter for its current transmission. Nevertheless, we show that this delayed CSI at the transmitter (delayed CSIT) can help the transmitter to achieve significantly higher data rates compared to having no CSI. We indeed show that delayed CSIT increases the channel degrees of freedom (DoF), which is translated to an unbounded increase in capacity with increasing signal-to-noise-ratio (SNR). For the symmetric case, i.e. with the same number of antennas at each receiver, we propose different transmission schemes whose achievable DoFs meet the upper bound for a wide range of transmit-receive antenna ratios. Also, for the general non-symmetric case, we propose transmission schemes that characterize the DoF region for certain classes of antenna configurations. Subsequently, we investigate channels with distributed transmitters, namely, Gaussian single-input single-output (SISO) K-user interference channel and 2×K X channel under the delayed CSIT assumption. In these channels, in major contrast to the broadcast channel, each transmitter has access only to its own messages. We propose novel multiphase transmission schemes wherein the transmitters collaboratively align the past interference at appropriate receivers using the knowledge of past CSI. Our achievable DoFs are greater than one (which is the channel DoF without CSIT), and strictly increasing in K. Our results are yet the best available reported DoFs for these channels with delayed CSIT. Furthermore, we consider the K-user r-cyclic interference channel, where each transmitter causes interference on only r receivers in a cyclic manner. By developing a new upper bound, we show that this channel has K/r DoF with no CSIT. Moreover, by generalizing our multiphase transmission ideas, we show that, for r=3, this channel can achieve strictly greater than K/3 DoF with delayed CSIT. Next, we add the capability of simultaneous transmission and reception, i.e. full-duplex operation, to the transmitters, and investigate its impact on the DoF of the SISO Gaussian K-user interference and M×K X channel under the delayed CSIT assumption. By proposing new cooperation/alignment techniques, we show that the full-duplex transmitter cooperation can potentially yield DoF gains in both channels with delayed CSIT. This is in sharp contrast to the previous results on these channels indicating the inability of full-duplex transmitter cooperation to increase the channel DoF with either perfect instantaneous CSIT or no CSIT. With the recent technological advances in implementation of full-duplex communication, it is expected to play a crucial role in the future wireless systems. Finally, we consider the Gaussian K-user interference and K×K X channel with output feedback, wherein each transmitter causally accesses the output of its paired receiver. First, using the output feedback and under no CSIT assumption, we show that both channels can achieve DoF values greater than one, strictly increasing in K, and approaching the limiting value of 2 as K→∞. Then, we develop transmission schemes for the same channels with both output feedback and delayed CSIT, known as Shannon feedback. Our achievable DoFs with Shannon feedback are greater than those with the output feedback for almost all values of K.