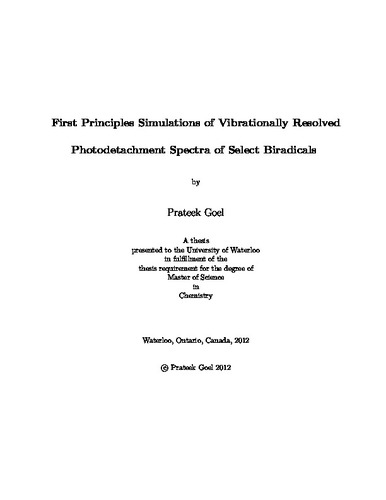 Nonadiabatic dynamical processes are ubiquitous in chemistry and biology. Such events are directly connected to the treatment of energetically close lying states which gives rise to strong vibronic interactions in which case the Born-Oppenheimer approximation tends to break down. In case of biradicals, nonadiabatic events are facilitated by conical intersections, as a result of symmetry lowering of degenerate electronic states due to Jahn-Teller distortion. A central problem in the treatment of the nonadiabatic molecular dynamics is posed by the representation of potential energy surfaces. A point by point calculation of a potential energy surface on a multi-dimensional grid is very cumbersome and in general does not provide with an analytical functional form of the potential. This becomes even more complicated when the adiabatic surfaces have cusps, where the function becomes non-differentiable. Vibronic model Hamiltonians, which represent the potential in the form of a potential matrix which contains the electronic energies as well as the couplings in a diabatic basis. A Taylor series expansion of the potential matrix can be done to get a smooth analytical functional form of the potential matrix elements. These models can then be used to perform nuclear dynamics using either exact diagonalization time-independent method or the wavepacket propagation based time-dependent methods. Thus, vibronic models provide a compact representation of complicated coupled potential energy surfaces, which can be used in conjunction with non-adiabatic nuclear dynamics Vibronic models have been constructed for selected biradicals, for which photodetachment spectra have been simulated using the time-independent (VIBRON) as well as time-dependent (MCTDH) methods. Consistent results have been obtained with both the approaches for small systems. This also assures the use of MCTDH program for larger systems, where the time-independent methods are not applicable. Moreover, for biradicals, the parent anionic state also undergoes a Jahn-Teller distortion, or often the ground state potential energy surface is highly anharmonic in nature. This requires the description of anionic ground state by a vibronic model. Therefore, in order to simulate the photodetachment spectra of biradicals, three vibronic models are constructed for each simulation. The first model describes the ground and excited states of the parent anionic (neutral) species. Two other vibronic models describe singlet and triplet states of the target neutral (cation) species, and the spectrum is simulated using the vibronic ground state(s) of the anion (neutral) as the absorbing state in VIBRON/MCTDH. The electronic states and vibronic model parameters are obtained using the IP-EOM-CCSD and DIP-STEOM-CCSD methodology as coded in the ACESII quantum chemistry program package. The photodetachment spectra of nitrate radical, cyclobutadiene negative ion and trimethylene negative ion have been studied using this methodology.