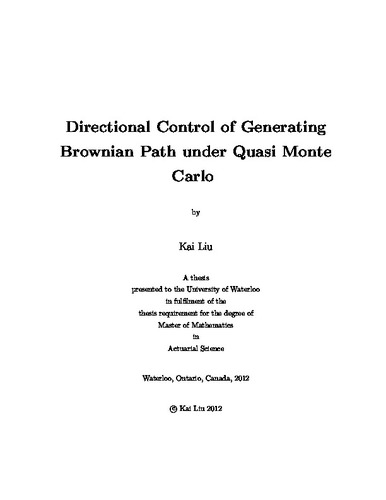 Quasi-Monte Carlo (QMC) methods are playing an increasingly important role in computational finance. This is attributed to the increased complexity of the derivative securities and the sophistication of the financial models. Simple closed-form solutions for the finance applications typically do not exist and hence numerical methods need to be used to approximate their solutions. QMC method has been proposed as an alternative method to Monte Carlo (MC) method to accomplish this objective. Unlike MC methods, the efficiency of QMC-based methods is highly dependent on the dimensionality of the problems. In particular, numerous researches have documented, under the Black-Scholes models, the critical role of the generating matrix for simulating the Brownian paths. Numerical results support the notion that generating matrix that reduces the effective dimension of the underlying problems is able to increase the efficiency of QMC. Consequently, dimension reduction methods such as principal component analysis, Brownian bridge, Linear Transformation and Orthogonal Transformation have been proposed to further enhance QMC. Motivated by these results, we first propose a new measure to quantify the effective dimension. We then propose a new dimension reduction method which we refer as the directional method (DC). The proposed DC method has the advantage that it depends explicitly on the given function of interest. Furthermore, by assigning appropriately the direction of importance of the given function, the proposed method optimally determines the generating matrix used to simulate the Brownian paths. Because of the flexibility of our proposed method, it can be shown that many of the existing dimension reduction methods are special cases of our proposed DC methods. Finally, many numerical examples are provided to support the competitive efficiency of the proposed method.