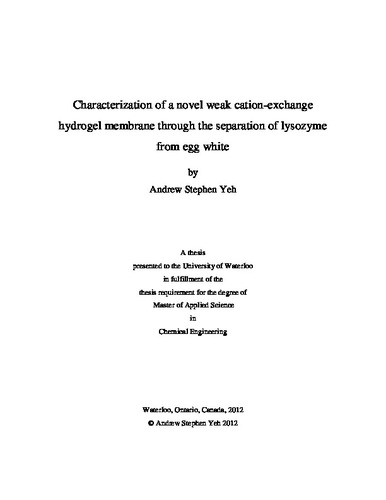 Membrane chromatography was investigated as an alternative method to packed-bed chromatography for protein recovery. The purification of lysozyme from egg white with Natrix adseptTM weak cation-exchange membranes was investigated under two different binding configurations: (1) a non-flow, static set-up with variable pH and sodium chloride (NaCl) concentrations during the binding and elution steps, and (2) a dynamic, cross-flow set-up with recycle at pH 7.5 and no NaCl addition during binding. The weak cation-exchange membrane consisted of a carboxylic acid-based, environmentally-responsive hydrogel layer bonded to a polymer matrix. Lysozyme was chosen to illustrate protein-membrane binding interactions due to its well-characterized nature and positive surface charge over a large pH range. For the static binding set-up, two sources of lysozyme were studied: pure lysozyme and egg whites treated with 60 % (v/v) ethanol (ESEW). Elution of bound protein was performed with 1 M NaCl under two pH strategies: binding and elution at a constant pH, and binding at pH 4.5 and variable elution pH. The highest maximum total protein binding capacity for pure lysozyme and ESEW was observed at pH 4.5 with no NaCl addition; however, poor total protein and lysozyme activity recovery were achieved during separation. As well, other egg white proteins, such as ovomucoid, were observed to bind to the membrane surface at pH 4.5, despite possessing similar charge polarity to the anionic membrane surface, indicating a non-electrostatic binding mechanism during operation below the membrane’s pKa (4.7). Based on the conditions tested, the highest total protein and lysozyme activity recovery was demonstrated for the separation of lysozyme from ESEW at pH 7.5 binding and elution and no NaCl addition. In the dynamic binding study, very high pure lysozyme dynamic binding capacity was achieved at 10 % breakthrough (167.3 mg/ml membrane for a 0.35 mg/ml lysozyme solution). The lysozyme dynamic binding capacity was 2.2 times greater than the static binding capacity under similar conditions, significantly higher than published results for other cation-exchange membranes. The separation of lysozyme from four lysozyme sources was tested: pure lysozyme, ESEW, and aqueous egg whites with (ASEW) and without (AEW) 100 mM NaCl. The highest lysozyme activity recovery during separation and lysozyme purity was achieved from the ESEW feed. Lysozyme separation from aqueous egg whites was not as effective, likely due to a high concentration of negatively-charged protein impurities fouling the surface of the membrane. Competitive binding to the membrane limited lysozyme binding and reduced the purity of the recovery elution stream. The application of feed-side pressure during the separation of ESEW produced a high purity, high recovery lysozyme elution stream with a significant reduction in processing time; however, protein aggregates were observed to form on the membrane surface, limiting the applicability of high-pressure operation and reducing protein functionality in the elution stream. The weak cation-exchange membrane system was shown to successfully separate out a target protein from a low concentration protein mixture through electrostatic interactions, and may be further applied to other protein systems.