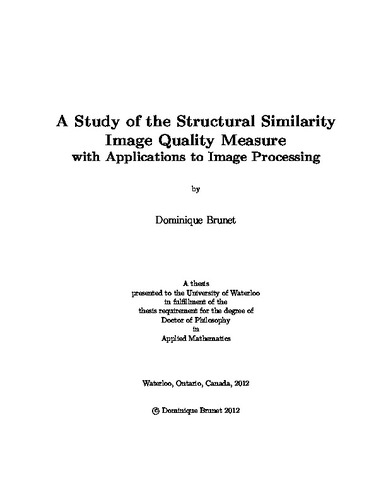 Since its introduction in 2004, the Structural Similarity (SSIM) index has gained widespread popularity as an image quality assessment measure. SSIM is currently recognized to be one of the most powerful methods of assessing the visual closeness of images. That being said, the Mean Squared Error (MSE), which performs very poorly from a perceptual point of view, still remains the most common optimization criterion in image processing applications because of its relative simplicity along with a number of other properties that are deemed important. In this thesis, some necessary tools to assist in the design of SSIM-optimal algorithms are developed. This work combines theoretical developments with experimental research and practical algorithms. The description of the mathematical properties of the SSIM index represents the principal theoretical achievement in this thesis. Indeed, it is demonstrated how the SSIM index can be transformed into a distance metric. Local convexity, quasi-convexity, symmetries and invariance properties are also proved. The study of the SSIM index is also generalized to a family of metrics called normalized (or M-relative) metrics. Various analytical techniques for different kinds of SSIM-based optimization are then devised. For example, the best approximation according to the SSIM is described for orthogonal and redundant basis sets. SSIM-geodesic paths with arclength parameterization are also traced between images. Finally, formulas for SSIM-optimal point estimators are obtained. On the experimental side of the research, the structural self-similarity of images is studied. This leads to the confirmation of the hypothesis that the main source of self-similarity of images lies in their regions of low variance. On the practical side, an implementation of local statistical tests on the image residual is proposed for the assessment of denoised images. Also, heuristic estimations of the SSIM index and the MSE are developed. The research performed in this thesis should lead to the development of state-of-the-art image denoising algorithms. A better comprehension of the mathematical properties of the SSIM index represents another step toward the replacement of the MSE with SSIM in image processing applications.