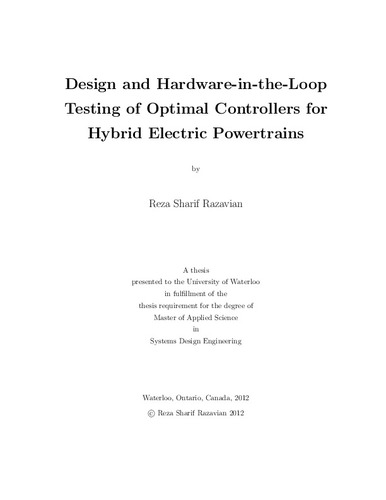 The main objective of this research is the development of a flexible test-bench for evaluation of hybrid electric powertrain controllers. As a case study, a real-time near-optimal powertrain controller for a series hybrid electric vehicle (HEV) has been designed and tests. The designed controller, like many other optimal controllers, is based on a simple model. This control-oriented model aims to be as simple as possible in order to minimize the controller computational effort. However, a simple model may not be able to capture the vehicle's dynamics accurately, and the designed controller may fail to deliver the anticipated behavior. Therefore, it is crucial that the controller be tested in a realistic environment. To evaluate the performance of the designed model-based controller, it is first applied to a high-fidelity series HEV model that includes physics-based component models and low-level controllers. After successfully passing this model-in-the-loop test, the controller is programmed into a rapid-prototyping controller unit for hardware-in-the-loop simulations. This type of simulation is mostly intended to consider controller computational resources, as well as the communication issues between the controller and the plant (model solver). As the battery pack is one of the most critical components in a hybrid electric powertrain, the component-in-the-loop simulation setup is used to include a physical battery in the simulations in order to further enhance simulation accuracy. Finally, the driver-in-the-loop setup enables us to receive the inputs from a human driver instead of a fixed drive cycle, which allows us to study the effects of the unpredictable driver behavior. The developed powertrain controller itself is a real-time, drive cycle-independent controller for a series HEV, and is designed using a control-oriented model and Pontryagin's Minimum Principle. Like other proposed controllers in the literature, this controller still requires some information about future driving conditions; however, the amount of information is reduced. Although the controller design procedure is based on a series HEV with NiMH battery as the electric energy storage, the same procedure can be used to obtain the supervisory controller for a series HEV with an ultra-capacitor. By testing the designed optimal controller with the prescribed simulation setups, it is shown that the controller can ensure optimal behavior of the powertrain, as the dominant system behavior is very close to what is being predicted by the control-oriented model. It is also shown that the controller is able to handle small uncertainties in the driver behavior.