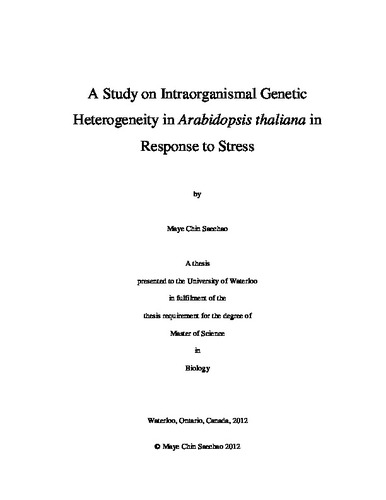 In sexually reproducing individuals, intraorganismal genetic heterogeneity (IGH) or mosaicism is thought to occur infrequently while genetic homogeneity is presumed the norm. In organisms that undergo modular development, such as long-lived plants, IGH has been substantially documented. In Arabidopsis thaliana we have shown that non-parental DNA that is inherited at low but detectable rates can also manifest on single plants as genotypically distinct somatic sectors suggesting that even short-lived annual plants show IGH. The underlying mechanism responsible for generating this type of IGH remains unknown. In order to better understand this phenomenon I have tested the hypothesis that among genome changes that occur in response to stress, these putative triggers also up-regulate IGH. Metabolic stress, cold stress, mechanical damage and ROS exposure were examined. To test for IGH, transgene markers and polymorphic molecular markers were used. Also, presented in this thesis is work investigating the effect of in vitro propagation through tissue culture on IGH frequencies. Regenerated plants as well as undifferentiated callus tissue were genotyped and assayed for sequence reversions. Molecular genotyping revealed an outcome contrary to that predicted by the initial hypothesis showing instead that a high frequency of restoration occurred in the progeny of un-treated control plants. With the exception of samples passed through tissue culture, molecular marker changes, including single and double reversions of alleles, were detected in every line at some low level Furthermore, many of the revertants were found to be genetic mosaics. DNA sequence analyses revealed that sequences flanking three molecular markers that had undergone reversion were near identical to the great-grandparent of the sequenced individual. These results suggest that stress is perhaps an inhibitor of restoration. Although there may be other explanations for the results described in this thesis, the evidence implicates genome restoration as a mechanism for generating IGH.