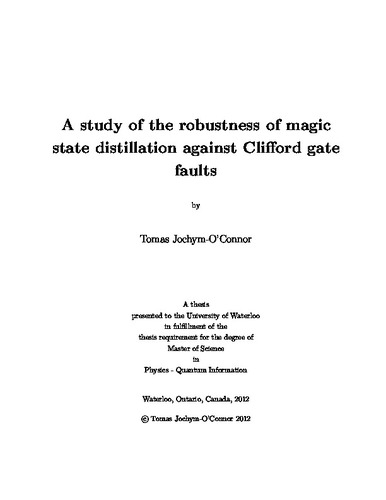 Quantum error correction and fault-tolerance are at the heart of any scalable quantum computation architecture. Developing a set of tools that satisfy the requirements of fault- tolerant schemes is thus of prime importance for future quantum information processing implementations. The Clifford gate set has the desired fault-tolerant properties, preventing bad propagation of errors within encoded qubits, for many quantum error correcting codes, yet does not provide full universal quantum computation. Preparation of magic states can enable universal quantum computation in conjunction with Clifford operations, however preparing magic states experimentally will be imperfect due to implementation errors. Thankfully, there exists a scheme to distill pure magic states from prepared noisy magic states using only operations from the Clifford group and measurement in the Z-basis, such a scheme is called magic state distillation [1]. This work investigates the robustness of magic state distillation to faults in state preparation and the application of the Clifford gates in the protocol. We establish that the distillation scheme is robust to perturbations in the initial state preparation and characterize the set of states in the Bloch sphere that converge to the T-type magic state in different fidelity regimes. Additionally, we show that magic state distillation is robust to low levels of gate noise and that performing the distillation scheme using noisy Clifford gates is a more efficient than using encoded fault-tolerant gates due to the large overhead in fault-tolerant quantum computing architectures.