Theory and Applications of Josephson Photomultipliers 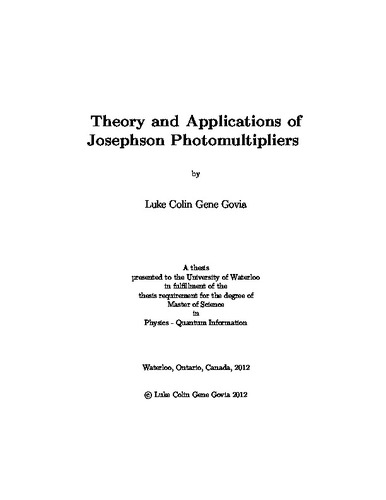 This thesis describes the back action of microwave-photon detection via a Josephson photomultiplier (JPM), a superconducting qubit coupled strongly to a high-quality mi- crowave cavity, and the applications of these devices. The back action operator depends qualitatively on the duration of the measurement interval, resembling the regular photon annihilation operator at short interaction times and approaching a variant of the photon subtraction operator at long times. The optimal operating conditions of the JPM differ from those considered optimal for processing and storing of quantum information, in that a short T2 of the JPM suppresses the cavity dephasing incurred during measurement. Un- derstanding this back action opens the possibility to perform multiple JPM measurements on the same state, hence performing efficient state tomography. In addition, this the- sis describes the creation of non-classical states of microwave radiation via single photon detection using JPMs. When operated in the low T2 regime, the back action of a JPM resembles the photon subtraction operator. Using the non-linearity of this back action, it is possible to create non-classical states of microwave radiation, including squeezed vacuum and odd Schro ̈dinger cat states, starting from a coherent state.