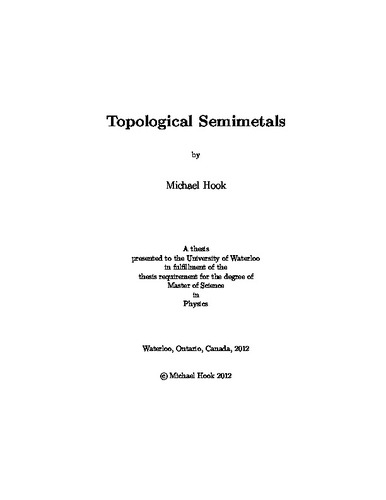 This thesis describes two topological phases of matter, the Weyl semimetal and the line node semimetal, that are related to but distinct from topological insulator phases. These new topological phases are semimetallic, having electronic energy bands that touch at discrete points or along a continuous curve in momentum space. These states are achieved by breaking time-reversal symmetry near a transition between an ordinary insulator and a topological insulator, using a model based on alternating layers of topological and ordinary insulators, which can be tuned close to the transition by choosing the thicknesses of the layers. The semimetallic phases are topologically protected, with corresponding topological surface states, but the protection is due to separation of the band-touching points in momentum space and discrete symmetries, rather than being protected by an energy gap as in topological insulators. The chiral surface states of the Weyl semimetal give it a non-zero Hall conductivity, while the surface states of the line node semimetal have a flat energy dispersion in the region bounded by the line node. Some transport properties are derived, with a particular emphasis on the behaviour of the conductivity as a function of the impurity concentrations and the temperature.