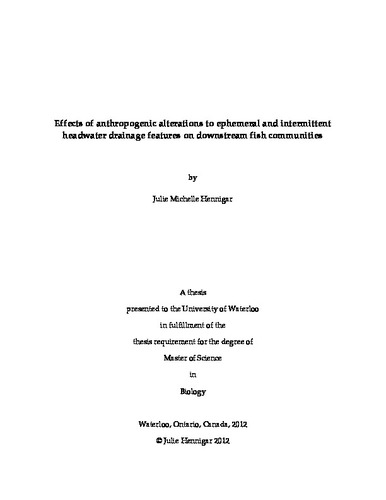 Headwater drainage features (HDFs) in the GTA are commonly subjected to land-use modifications including agricultural uses and urbanization. A temporal study design approach was used to test whether the runoff being exported from previously modified HDFs differed from runoff exported from less disturbed forested channels. Drift nets were deployed in the permanent reaches of streams and in the HDF channels, to give an indication of the quality and quantity of drifting materials. Gastric lavage was used to remove stomach contents from creek chub living downstream from HDFs and these contents were used to determine if invertebrates in HDF runoff could act as food immediately upon reaching fish-bearing sections of stream. Reaches of streams associated with forested HDFs were found to have more fish than either those associated with agricultural or urban HDFs (203, 184 and 145 fish per forested, agricultural and urban site, respectively). Sites associated with forested catchments also had a greater number of salmonids per site. Conditions of high flow in the stream and the HDF coincided with an increased quantity of drifting invertebrates in all site types and land uses, as well as a decrease in the proportion of creek chub with empty stomachs. Overall, aquatic Diptera were the most numerous invertebrates captured in drift nets and in the stomach contents of creek chub. Hymenoptera, terrestrial Oligochaeta and Diplopoda also made major contributions to the diets of creek chub. Results indicate that HDFs in all land uses are exporting both aquatic and terrestrial invertebrates to main streams at times of high flow. Creek chub consume more prey at times of high flow, and this often includes terrestrial invertebrates, which must have been imported from terrestrial sources to the aquatic environment, however the degree to which they are exported by HDFs is still not clear. The series of complex interactions occurring at the HDF/main stream interface requires further study.