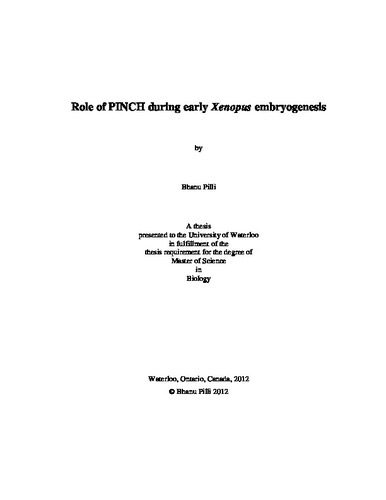 In the Xenopus embryo, cell rearrangements during early development require the dynamic modulation of adhesion. Cells primarily use the integrin family of transmembrane receptors for attachment to and interpretation of the extracellular environment. While acting as adhesion receptors, integrins also have bidirectional signalling properties essential for driving cellular movements. The regulation of integrin activity is thought to stem from cytoplasmic assemblies of constitutively expressed molecules. PINCH (Particularly Interesting New cysteine-histidine rich protein), an adapter protein, is part of an IPP complex that has emerged as a key signalling scaffold indispensable for integrin function in vitro. As such, I tested the hypothesis that PINCH regulates integrin function in the Xenopus embryo. Xenopus PINCH was successfully cloned using RT-PCR. The predicted amino acid sequence of PINCH shares a 98% similarity with mammalian orthologs, and comprises of five highly conserved LIM domains. PINCH mRNA and protein are ubiquitously expressed throughout embryogenesis. In situ hybridization indicates that PINCH mRNA is expressed in the blastocoel roof and the pre-involution mesoderm. The localization and temporal expression of PINCH suggests a role in mediating cell adhesive events during gastrulation. A functional approach was used to examine the role of PINCH during gastrulation. I used site-directed mutagenesis to generate non-functional LIM1 (LIM1mut) and LIM4 (LIM4mut) domains that have been proposed to bind ILK and Grb4 respectively. Over-expression of PINCH leads to a delay in blastopore closures, while the expression of both LIM1mut and LIM4mut relieve this inhibition at lower concentrations. Further analysis indicates that PINCH, LIM1mut, and LIM4mut inhibit FN matrix assembly independent of integrin adhesion. Contradictory to in vitro studies, co-immunoprecipitation analysis indicates that endogenous PINCH does not bind ILK, confirming an integrin-independent role during gastrulation. Furthermore, in the embryo PINCH is found at cell boundaries but does not appear to directly modulate cadherin adhesion. As such this thesis provides evidence that PINCH regulates cell intercalation movements independent of integrin and cadherin receptors and raises the possibility that the LIM4 domain is involved in PINCH regulation of cell adhesion during early development.