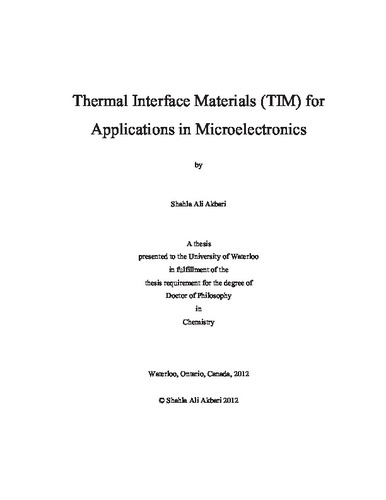 A major challenge in the formulation of thermal interface materials (TIM), used in the microelectronics industry to facilitate heat transfer from an electronic package to a heat sink, is to ensure that the material is electrically insulating while achieving a high thermal conductivity. Several parameters influence thermal conductivity, but it will be shown that proper selection of the polymers serving as binders and additives in the formulation is important. The incorporation of electrically insulated metallic particles as fillers can also help to increase the thermal conductivity of a TIM. This Dissertation is concerned with exploring different strategies for the preparation of thermally conducting, but electrically insulating TIM compositions. Among these, the synthesis and the application of functionalized (telechelic) poly(ethylene oxide), PEO, in the preparation of TIM will be explored in more details. To achieve this goal, we conducted the synthesis of telechelic oligomers containing a primary amine functional group at one end, and investigated their influence on the properties of metallic surfaces such as copper. The results obtained indicate that the PEO-NH2 oligomers can bind to copper metal and/or the oxide layer at its surface, leading to much lowered electrical conductivity for the particles. The composition of TIM formulations was optimized in a systematic fashion using these materials and effective thermal conductivities reaching up to 9.4 W/mK were attained, much higher than for two commercial TIM used as benchmarks (1.5 W/mK for Arctic Silver 5, and 3.5 W/mK for ShinEtsu X23-7783D). Moreover, thinner layers (down to 0.004 mm) were achieved for the materials developed as compared to commercial TIM (0.07 mm). Additionally, we used a computational approach based on the method of random resistor networks to predict the effective thermal conductivity of the TIM. We studied the effects of mono- and polydispersed filler particle size distributions, as well as geometry (spherical particles and flakes). The influence of the PEO-NH2 oligomers acting as surfactants on the effective thermal conductivity was also investigated by defining surfactant concentration-dependent thermal conductivities. We finally compared the results of the numerical simulations with our experimental data and obtained excellent agreement for most compositions.