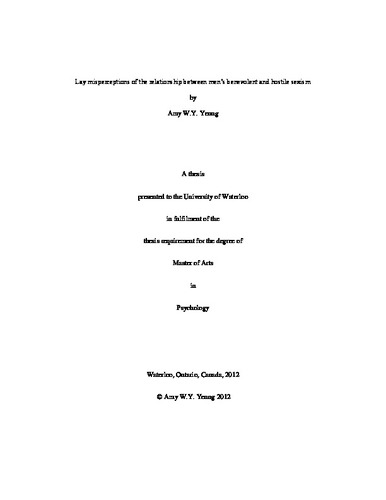 Although there is a reliably positive association between hostile (HS) and benevolent sexism (BS), lay perceptions of this association have not been directly tested. I predicted that people perceive an illusory negative association between men’s HS and BS attitudes because lay theories expect men to have univalent attitudes toward women. In Study 1, I manipulated the target’s gender and responses on a subscale of the Ambivalent Sexism Inventory (high HS, low HS, high BS, or low BS). The low BS male target (compared to high BS male target) was judged to be higher on HS, less supportive of female professionals, less good of father and husband, and more likely to perpetrate domestic violence. Ratings of the low BS male target were as equally negative as those of the high HS male target. In Study 2, low BS male targets were judged to be low in hostility towards women only if they explicitly stated that their low BS was motivated by egalitarian values, otherwise men’s low BS was assumed to indicate misogyny. Implications of the misconception of BS in men and future directions are discussed.