The Third Distinction of Michael Scot's Liber quattuor distinctionum: a window into the social world of astrologers in the early thirteenth century 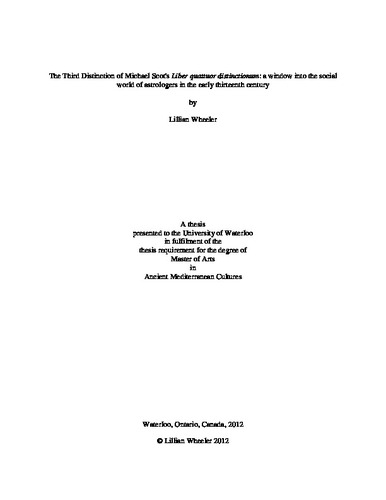 Michael Scot remains an under-studied figure of the early thirteenth century, in particular with regard to his main original work, the Liber introductorius. This work has never been comprehensively edited, although several partial editions do exist. Scot's translations have received scholarly attention and their importance has been recognized, however, his original work has received a fairly negative assessment from scholars. A close look at one section of the Liber introductorius (Liber quattuor distinctionum, third distinction, CLM fols. 118rb-120ra), although it does conform to what scholars have found in other sections of Scot's work, offers another avenue of study; namely, the social historical aspects of astrology and astrologers in the early thirteenth century. Through his practical instructions to fledgling astrologers in matters such as their house, comportment, and dealings with customers, Scot provides us with a window into the social world of the astrologers of his time.

Lillian Wheeler (2012). The Third Distinction of Michael Scot's Liber quattuor distinctionum: a window into the social world of astrologers in the early thirteenth century. UWSpace. http://hdl.handle.net/10012/6957