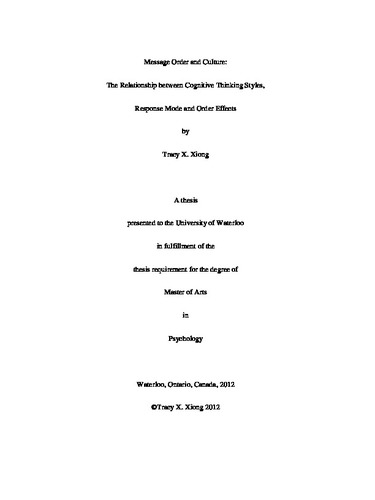 Previous research has documented the prevalent effects of message order on message persuasiveness. Based on the Belief Updating Model (Hogarth and Einhorn, 1992), response mode has been found as one moderator of primacy versus recency effects. The present study considers additionally the role of culture as a moderator. Because internalized cultural values and norms affect how messages are processed and interpreted, we propose that cultural differences in cognitive processing styles will impact whether primacy or recency effects are stronger under different message order conditions in for Easterners and Westerners. Results from the current work offer evidence that both culture and cognitive style (holistic versus analytical thinking) serve as moderators to explain message order effects. Results replicate prior studies showing a primacy effect with End of Sequence response mode and a recency effect with Step-by-Step response mode. Further, we found that Easterners were more influenced by the primacy effect when compared to Westerners. However, the effect of primacy was attenuated by response mode. Westerners were equally influenced by both primacy and recency effects.