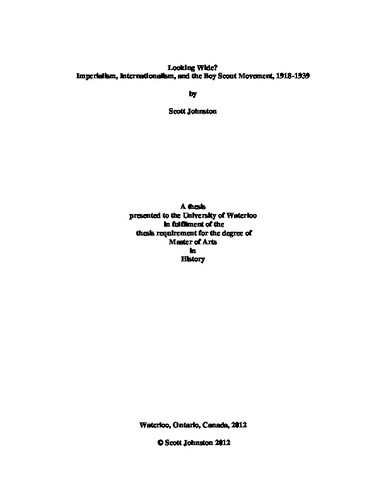 The Boy Scout Movement is one of the most influential youth movements of the twentieth century. Begun in the context of Edwardian imperialism as a foil to fears of racial decline, the movement’s militarism became a liability following the First World War, when Scouting’s widespread, trans-national popularity forced it to enter the political sphere that dominates international relations. Based on extensive archival research in both the United Kingdom and Canada, this thesis traces the evolution of the Scout Movement from a British imperial institution into an international brotherhood in the 1920s and 1930s. It reveals a tense relationship between the worldwide membership and the central administration of the movement. Despite efforts by founder Robert Baden-Powell to create an image of unity, Scouting proved ungovernable from a single ideological source, and local conditions dictated the form that it took in each domestic situation. Scouting therefore both deeply influenced, and was influenced by, the cultures and communities into which it was transplanted.