Cannibalizing The System: The Film Noir Backlash in Hollywood 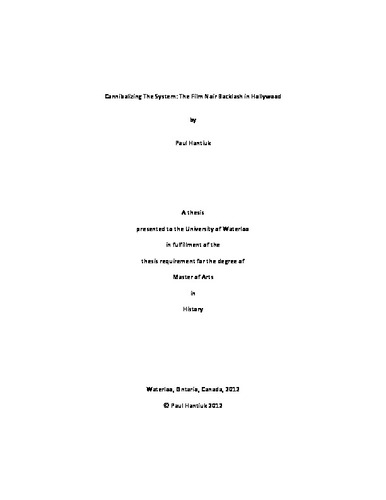 The central goal of this thesis is to resituate the development of film noir within the context of the Hollywood studio system that created it. I argue that under the ‘factory’ conditions of the studio’s working environment, a distaste fermented from the screenwriter class that burrowed in the pulp fiction, particularly hard-boiled mystery fiction, of the era. This strain of literature was eventually coupled with the panache of Hollywood style to form a filmic style which was noteworthy for its ability to use Hollywood stylistics to screen a vision of life that was antithetical to that which the studio system wanted to offer to the mass public. I have also attempted to situate the original and most crystallized noir moment in the mid-1940s as part of the continuum of American cinema where the stylistic traces of noir were present prior to that period, and certainly after, but never more coherently than at that moment in the 1940s. I have assembled sources ranging from published interview collections, memoirs, biographies, film criticism and archival collections to develop my argument about the literary, filmic and cultural evolution of film noir in Hollywood.