The House of Ontario: Restoring Meaning and Identity to Queen's Park 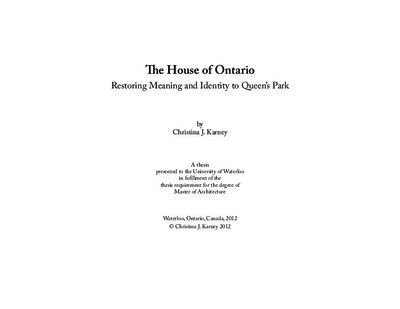 “It seems to me that Canadian sensibility has been profoundly disturbed, not so much by our famous problem of identity, important as that is, as by a series of paradoxes in what confronts that identity. It is less perplexed by the question ‘Who am I?’ than by some such riddle as ‘Where is here?’” - Northrop Frye Canada is the only country in the world that knows how to live without an identity. – Marshall McLuhan As Canadians we struggle with issues of identity. Our land is so vast that it can never be simply categorized and our culture is so diverse and rich that it can never be reduced to a single group or ancestry. In Ontario, the question of identity is equally complex. Larger than many counties, Ontario is made up of three distinct geographic regions, its edges defined by borders on five US states and two provinces, and it is home to one of the most culturally diverse populations in the world. Ontario holds 40% of Canada’s population and Toronto, it’s capital, is the largest city in the country. Sitting at the very centre of Toronto’s educational and ceremonial core is Queen’s Park, home of the Provincial Legislature the place from which Ontario is governed and the place which is tasked with embodying and representing all of Ontario. Composed of a 19th century building and a generous public landscape, Queen’s Park is easily recognizable at a distance, yet it suffers from a deficit of meaning and identity. The park may ‘work’ in the most basic sense but leaves much to be desired for one of the most prominent, and symbolically significant places in both the city and the province. Over the course of its 150 years of history, the park has seen the disappearance of Taddle creek, various alterations in the landscape, the accrued collection of monuments and memorials, the demolition and construction of several buildings and countless public gatherings. All of these manipulations, deletions, additions and events fail to suggest anything other than our society remains supplicant to greater powers, disconnected from its environment and unsure of its identity. Yet, in spite of all these issues, Queen’s Park is full of potential. The goal of this thesis is to test the capacity of architecture to give voice to a new vision for Ontario’s capital that more fully reflects the forces at work in society. Equally significant for this thesis has been my own parallel quest for meaning and identity as a woman in the 21st century who is both prospective architect and engaged citizen. I deeply felt a need to find architectural sources of inspiration founded on compassion, empathy and an engagement with the land. This desire for meaning has led me to discover the ancestral heritage of Ontario and to take ownership of my own roots. These two streams, one architectural and one personal are woven together to build a design approach for Queen’s Park. The thesis is organized in four parts, completing one cycle of design. Part 1: ‘Stories of Migration’ uses female voices extending back to the land’s geological formation in order to invent a mythology for Toronto and to engage with the voice of the other. Part 2: ‘Capitols of Identity’ uses case studies of civic architecture and public space in Ontario to explore the relationship between power, landscape and place in cities. Part 3: ‘Messages of Queen’s Park’ recovers the lost identity of this urban artifact by forging more meaningful connections to its physical and metaphorical context. And finally, Part 4: offers a concluding vision to the building and landscape which create memorable spaces for civic engagement and play for the people of Ontario.