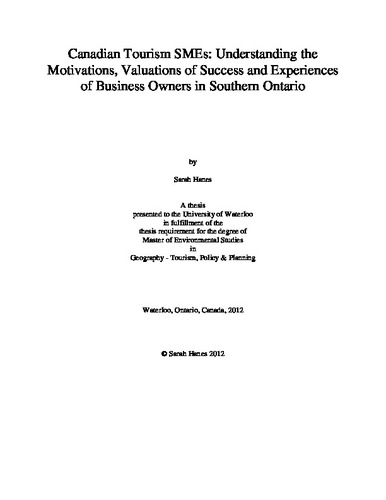 This research explores aspects of small tourism businesses in a Canadian context. A number of authors (e.g., Getz and Nilsson, 2004; Hall and Rusher, 2004; Lynch and Tucker, 2004; Morrison and Teixeira, 2004a/b) have noted that while small and medium sized enterprises (SMEs) are acknowledged as an important parts of the tourism industry, they are underrepresented in the academic literature. Of the small business research that has been conducted, a sizeable portion has focused on industries other than tourism; the tourism-specific research on SMEs has predominately been conducted in Western Europe, Australia and New Zealand and has frequently focused on a single segment of the industry, often the small accommodation sector. Little research of this nature has been done in a Canadian context. The study was set in Stratford and Goderich, Ontario, and compares and contrasts two parts of the tourism industry: the accommodation and food and beverage sectors. The study focused on small business owners and examined three main aspects: their motivations for starting/purchasing the business, how they evaluated the success of the business and the experiences they had while running the business. The research also set out to examine the demography of Canadian tourism SME owners and how they defined small business. A mixed methods approach was adopted. Data were collected through mailed questionnaires which were followed up with semi-structured interviews. Findings showed that despite motivations being similar between study sites and industries, the paths that lead owners to their business varied greatly. Though ‘lifestyle’ motivations were predominately cited, financial considerations were also noted. Owners frequently used financial calculations to measure the achievement of their lifestyle motivations. The experiences owners had with their business were overwhelmingly positive and were grouped into six themes: changes in the industry, relationship building, staffing, the importance of customer service, financial costs of running a small business and time management. The results of this study confirmed that Canadian tourism SME owners in Stratford and Goderich, Ontario, possess similar motivations, measurements of success and experiences as their national and international counterparts.