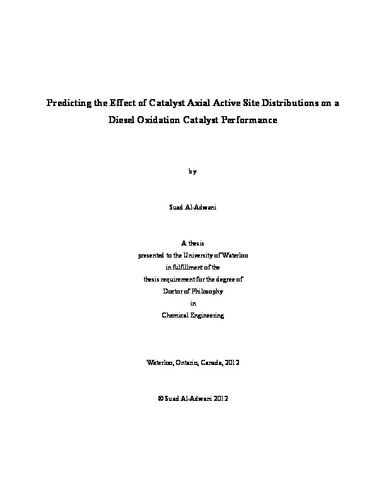 Zone-coated diesel oxidation catalysts (DOCs) can be used to obtain overall improved performance in oxidation reaction extents. However, why this occurs and under what conditions an impact is expected are unknown. In order to demonstrate why these catalysts work better than their standard counterparts and how significant the improved performance is, the CO oxidation performance over a series of Pt−Pd/Al2O3 catalysts, each with a different distribution of precious metal down the length, while maintaining equivalent totals of precious metal, was modeled. Simulations with different flow rates, ramp rates, steady-state temperatures at the end of the ramp rate, different total precious metal loadings, and CO inlet values were compared. At conversions less than 50%, the most significant differences were noted when the temperature was ramped to just at the CO oxidation light-off point (a typical measure of 50% conversion/oxidation), with catalysts containing more precious metal at the downstream portions leading to better light-off conversion performance. However, in terms of cumulative emissions over a long period of time, a “front-loaded” design proved best. These results are readily explained by decreased CO poisoning and the propagation of the heat derived from the exotherm from the front to the rear of the catalyst. Also, although the trends were the same, regardless of change in the parameter, the impact of different distributions was more apparent under conditions where a catalyst would be challenged, i.e., at low temperature ramp rates, higher CO inlet concentrations, and lower amounts of total catalyst used. At higher ramp rates, the input heat from the entering gas stream played an increasingly important role, relative to conduction associated with the exotherm, dampening the effects of the catalyst distribution. Therefore, although catalysts that are zone-coated with precious metals, or any active sites, could prove better in terms of performance than homogeneously distributed active site catalysts, this improvement is only significant under certain reaction conditions. In a mixture of three reactants, CO, C3H6 and NO oxidation, it was found that a loading a larger amount of active sites in the catalyst middle, maintained better CO and C3H6 oxidation but not NO oxidation, which required the whole catalyst length. A faster light-off conversion was also related to higher amount of precious metal at the catalyst outlet. The CO conversion performance for a variety of distributed precious metal designs was evaluated as a function of exposure time to sulphur and the spatial accumulation profile of sulphur along the monolith length was predicted. The results illustrate that the sulphur accumulates near the catalyst inlet and decreases toward the outlet, resulting in shifting the reaction zones further toward the catalyst outlet. With sulfation, light-off temperatures (T50) increased and the time for back to front reaction propagation also increased. A back loaded catalyst resulted in the best light-off conversion compared to the other catalyst designs and a middle loaded catalyst maintained a higher overall conversion if sulphur poisoning takes place. These catalyst designs were also tested under thermal aging conditions by using a second order sintering model integrated with the CO oxidation reaction model. The spatial normalized dispersion profiles along the monolith showed that the catalyst outlet experienced significant damage relative to the inlet due to sintering. A front loaded catalyst design had the highest catalytic activity due its resistance to sintering.