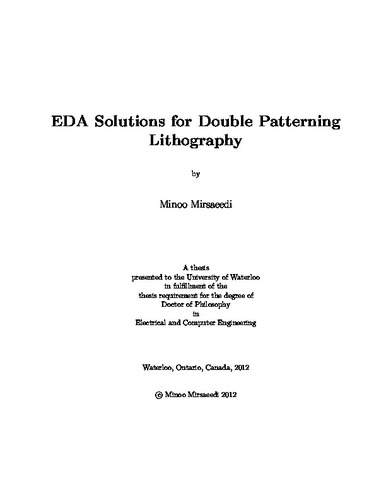 Expanding the optical lithography to 32-nm node and beyond is impossible using existing single exposure systems. As such, double patterning lithography (DPL) is the most promising option to generate the required lithography resolution, where the target layout is printed with two separate imaging processes. Among different DPL techniques litho-etch-litho-etch (LELE) and self-aligned double patterning (SADP) methods are the most popular ones, which apply two complete exposure lithography steps and an exposure lithography followed by a chemical imaging process, respectively. To realize double patterning lithography, patterns located within a sub-resolution distance should be assigned to either of the imaging sub-processes, so-called layout decomposition. To achieve the optimal design yield, layout decomposition problem should be solved with respect to characteristics and limitations of the applied DPL method. For example, although patterns can be split between the two sub-masks in the LELE method to generate conflict free masks, this pattern split is not favorable due to its sensitivity to lithography imperfections such as the overlay error. On the other hand, pattern split is forbidden in SADP method because it results in non-resolvable gap failures in the final image. In addition to the functional yield, layout decomposition affects parametric yield of the designs printed by double patterning. To deal with both functional and parametric challenges of DPL in dense and large layouts, EDA solutions for DPL are addressed in this thesis. To this end, we proposed a statistical method to determine the interconnect width and space for the LELE method under the effect of random overlay error. In addition to yield maximization and achieving near-optimal trade-off between different parametric requirements, the proposed method provides valuable insight about the trend of parametric and functional yields in future technology nodes. Next, we focused on self-aligned double patterning and proposed layout design and decomposition methods to provide SADP-compatible layouts and litho-friendly decomposed layouts. Precisely, a grid-based ILP formulation of SADP decomposition was proposed to avoid decomposition conflicts and improve overall printability of layout patterns. To overcome the limited applicability of this ILP-based method to fully-decomposable layouts, a partitioning-based method is also proposed which is faster than the grid-based ILP decomposition method too. Moreover, an A∗-based SADP-aware detailed routing method was proposed which performs detailed routing and layout decomposition simultaneously to avoid litho-limited layout configurations. The proposed router preserves the uniformity of pattern density between the two sub-masks of the SADP process. We finally extended our decomposition method for double patterning to triple patterning and formulated SATP decomposition by integer linear programming. In addition to conventional minimum width and spacing constraints, the proposed decomposition method minimizes the mandrel-trim co-defined edges and maximizes the layout features printed by structural spacers to achieve the minimum pattern distortion. This thesis is one of the very early researches that investigates the concept of litho-friendliness in SADP-aware layout design and decomposition. Provided by experimental results, the proposed methods advance prior state-of-the-art algorithms in various aspects. Precisely, the suggested SADP decomposition methods improve total length of sensitive trim edges, total EPE and overall printability of attempted designs. Additionally, our SADP-detailed routing method provides SADP-decomposable layouts in which trim patterns are highly robust to lithography imperfections. The experimental results for SATP decomposition show that total length of overlay-sensitive layout patterns, total EPE and overall printability of the attempted designs are also improved considerably by the proposed decomposition method. Additionally, the methods in this PhD thesis reveal several insights for the upcoming technology nodes which can be considered for improving the manufacturability of these nodes.