Echoes of Industry: Reinterpreting Artifacts of the Lachine Canal 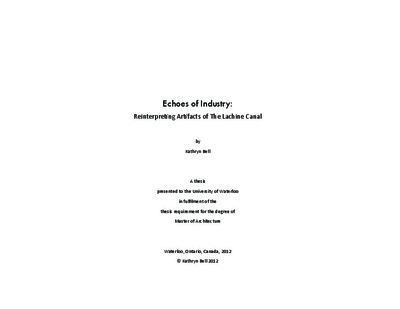 Montreal’s Lachine Canal, once the cradle of Canadian industry, is now riddled with industrial ruins, testaments to its productive past. Since the canal’s closing in the 1970’s, different attempts were made to reinterpret its role within the city. Contaminated sediments pollute the manufactured waterway, now stagnant and derelict. These toxic remains impact the redevelopments and heritage parks of the canal corridor. In the absence of any holistic future vision, these conditions pose a threat to local inhabitants and industrial artifacts. Meanwhile, Parks Canada’s approved heritage status pertaining to certain parts of the canal, further contributes to the segregation of the corridor into sporadic developments and static voids. Antoine Picon refers to these networks of technological remnants as ‘Anxious Landscapes’ – landscapes of artifacts that exist in the realm between technological obsolescence and ruin in the process of returning to nature. These landscapes are charged with industrial ruins and their residues in decay, perceived as waste, make us feel ill at ease with them. Portions of the canal and its industrial artifacts have been identified as having significant heritage value, but what productive possibilities do these heritage artifacts hold beyond their identified status? What possibilities do these imaginative playgrounds possess to reshape the corridor beyond its static blight? In abandoned industrial icons such as the Canada Malting Plant, resides the potential to address the remediation and reinterpretation of the corridor. The thesis investigates whether interaction with these industrial remnants can permit a tactile connection that allows us to uncover and explore the significance of such landscapes in a larger temporal perspective that considers past, present, and future. It proposes to reveal and express the historical development of the canal, exploring remedial solutions and spaces of community participation, energizing the Lachine Canal and its anxious landscape.