To Hurt the Pain: An Ethical Criticism of Nathanael West 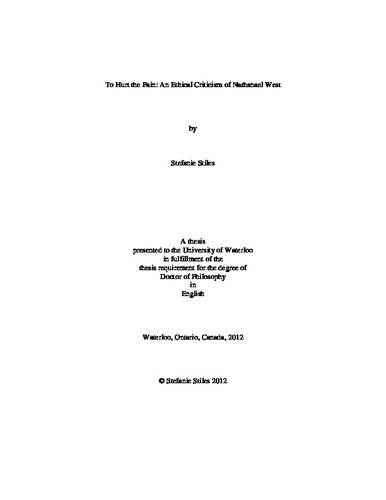 Nathanael West is typically considered to be a “major minor” American writer of the late modernist period. Best known today for Miss Lonelyhearts (1933) and The Day of the Locust (1939), West wrote four dark novellas that excoriated mainstream American culture of the 1930s. Earlier critics viewed his writing mainly as an existentialist exploration of universal human suffering; more recently, critics have claimed West as an avant-garde devoted to the criticism of Depression-era capitalism and consumer society. This thesis represents something of a return to the earlier, humanist study of West’s fiction, which he himself regarded primarily as moral satire. What differentiates this project from earlier studies, however, is its style of criticism. Since the 1980s, a new revitalized and reoriented ethical criticism has emerged, as evidenced by the proliferation of scholarly works and journal special issues on the topic of literature and ethics, the growing number of readers like Todd Davis and Kenneth Womack’s Mapping the Ethical Turn (2001), and the general trend toward linking moral philosophy and literary criticism, as carried out by Martha Nussbaum and Richard Rorty, among others. The new ethical criticism tends to be descriptive, rather than prescriptive. Using approaches inspired by the scholarship of this late-twentieth century wave of ethical critics, including Wayne Booth and Daniel Schwarz, this dissertation provides a new critical illumination of West the implied author’s unique system of ethics, as dramatized through his narrative explorations of particular lives. It attempts to answer the question that has puzzled Americanist scholars contemplating his works since their initial publication: how can a fictional world so sordid and savage still evoke feelings of compassion and humanity in so many readers? The answer, I will argue, lies in the very ferocity of the author’s depictions of universal human suffering, which ultimately inspire empathy and solidarity despite West’s very real misanthropy.