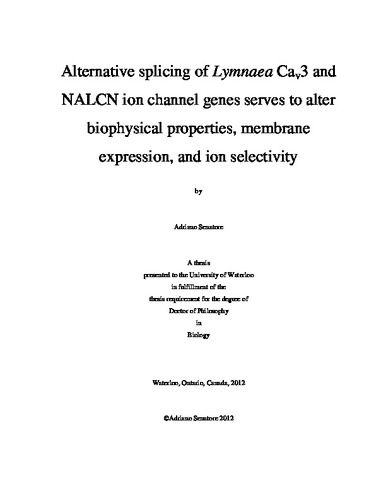 Evidence is presented that Lymnaea contains homologues for mammalian Cav3 and NALCN 4-domain ion channels, which retain key amino acid sequence motifs that differentiate these channels from other 4-domain types. Molecular cloning and heterologous expression of the first invertebrate Cav3 channel cDNA from Lymnaea confirms that it indeed is a true homologue to mammalian Cav3 channels, retaining some hallmark biophysical and pharmacological features1. Interestingly, the Lymnaea Cav3 channel gene also exhibits alternative splicing that is conserved with mammalian Cav3.1 and Cav3.2 channels, with homologous exons 8b in the I-II linker (Cav3.1) and 25c in the III-IV linker (Cav3.1 and Cav3.2), that can selectively be included or omitted from the full length channel. We show that the developmental and spatial expression patterns of these splice variants are remarkably conserved, and that these splice variants produce analogous changes in membrane localization and biophysical properties when channels are expressed in HEK-293T cells. The Lymnaea Cav3 channel gene also undergoes alternative splicing in the domain II P-loop, with mutually exclusive exons 12A and 12B that code for a large portion of the P-loop just upstream of the selectivity filter. Such splicing is a novel discovery that is not conserved with vertebrates or any other deuterostome animal, all of which only contain 12A homologues of exon 12. However, protostome animals including Lymnaea stagnalis, Drosophila melanogaster, and C. elegans all have mutually exclusive 12A and 12B exons in their Cav3 channel genes. Evidence is presented that exon 12A is likely the ancestral exon for the domain II P-loop, and that alternate exon 12B evolved later. Furthermore, although the two Lymnaea variants possess the same selectivity filter motifs characteristic for Cav3 channels (i.e. EEDD), they exhibit dramatic differences in calcium vs. sodium selectivity, without significant differences in biophysical properties. This is the first account of alternative splicing used to modulate ion selectivity in a Cav3 channel homologue, and given that calcium is such an important electrogenic signaling molecule, these alterations are expected to have profound physiological implications. Amazingly, Lymnaea NALCN was also found to undergo alternative splicing in the domain II P-loop, but in this case, the entire P-loop is replaced by mutually exclusive exons 15a and 15b such that the selectivity filter is converted from the proposed non-selective sodium-permeable configuration (15b/EKEE; EEKE in mammals, nematodes and insects), to a calcium channel-like pore (15a/EEEE). Thorough phylogenetic analysis reveals that NALCN is extremely unconventional, in that alternative splicing has frequently and independently evolved to alter the selectivity filter in domains II or III, in multiple animal clades. Furthermore, the ancestral NALCN channel most likely contained an EEEE pore. This work brings into question NALCN’s proposed role as a major leak sodium conductance that depolarizes neurons to help set the resting membrane potential, since some species possess only an EEEE variant, and based on homology to other 4-domain ion channels, this should render the channel calcium-selective. Unfortunately, heterologous expression and electrophysiological characterization of the two Lymnaea NALCN isoforms was unsuccessful, corroborating with others the inability to record NALCN ionic currents in heterologous systems.