Governing the “Government Party”: Liberal Party of Canada Leadership Conventions of 1948, 1958 and 1968 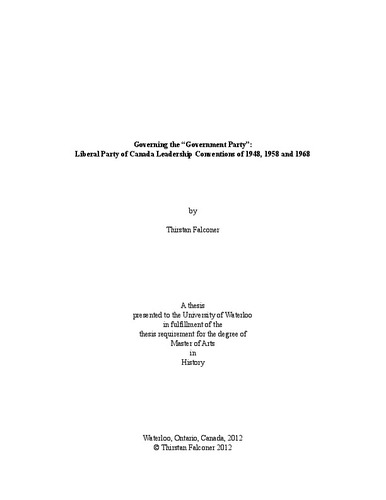 During the twentieth century, as Canadian voters began to associate the brand of their major political parties with the characteristics of their leaders, the Liberal Party of Canada’s leadership races evolved into events of national importance. This study examines this transformation through the 1948, 1958 and 1968 leadership conventions. It incorporates perspectives from inside the Liberal Party as well as the Canadian media’s portrayals of the conventions. This thesis explores the alternating pattern of anglophone and francophone Party leaders, the complications associated with the predictability of the outcome, the evolution of convention tactics to recruit delegate support, Party (dis)unity throughout the contests, and the political science theories that deconstruct the conventions and predict outcomes. It also details how, over time, the political ambitions of senior-ranking members trumped the interests the Liberal Party.