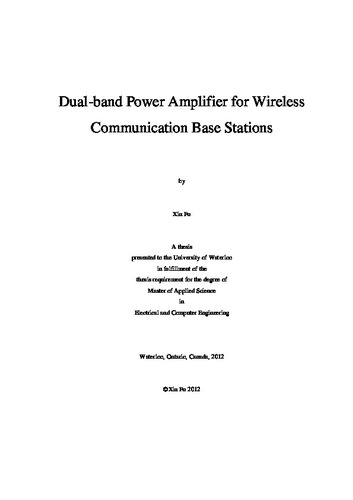 In wireless communication systems, multiple standards have been implemented to meet the past and present demands of different applications. This proliferation of wireless standards, operating over multiple frequency bands, has increased the demand for radio frequency (RF) components, and consequently power amplifiers (PA) to operate over multiple frequency bands. In this research work, a systematic approach for the synthesis of a novel dual-band matching network is proposed and applied for effective design of PA capable of maintaining high power efficiency at two arbitrary widely spaced frequencies. The proposed dual-band matching network incorporates two different stages. The first one aims at transforming the targeted two complex impedances, at the two operating frequencies, to a real one. The second stage is a dual-band filter that ensures the matching of the former real impedance to the termination impedance to 50 Ohm. Furthermore, an additional transmission line is incorporated between the two previously mentioned stages to adjust the impedances at the second and third harmonics without altering the impedances seen at the fundamental frequencies. Although simple, the harmonic termination control is very effective in enhancing the efficiency of RF transistors, especially when exploiting the Class J design space. The proposed dual-band matching network synthesis methodology was applied to design a dual-band power amplifier using a packaged 45 W gallium nitride (GaN) transistor. The power amplifier prototype maintained a peak power efficiency of about 68% at the two operating frequencies, namely 800 MHz and 1.9 GHz. In addition, a Volterra based digital predistortion technique has been successfully applied to linearize the PA response around the two operating frequencies. In fact, when driven with multi-carrier wideband code division multiple access (WCDMA) and long term evolution (LTE) signals, the linearized amplifier maintained an adjacent channel power ratio (ACPR) of about 50 dBc and 46 dBc, respectively.