Approximation, Proof Systems, and Correlations in a Quantum World 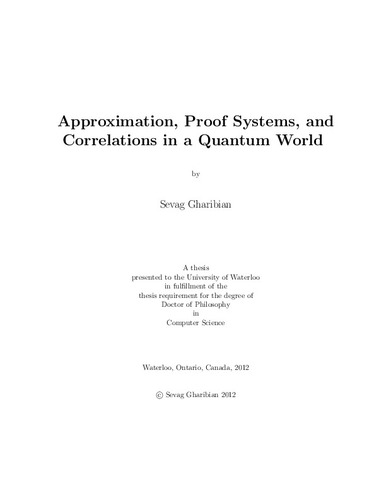 This thesis studies three topics in quantum computation and information: The approximability of quantum problems, quantum proof systems, and non-classical correlations in quantum systems. Our first area of study concerns the approximability of computational problems which are complete for quantum complexity classes. In the classical setting, the study of approximation algorithms and hardness of approximation is one of the main research areas of theoretical computer science. Yet, little is known regarding approximability in the quantum setting. We first demonstrate a polynomial-time approximation algorithm for dense instances of the canonical QMA-complete quantum constraint satisfaction problem, the local Hamiltonian problem. We next go in the opposite direction by first introducing a quantum generalization of the polynomial-time hierarchy. We then introduce problems which are not only complete for the second level of this hierarchy, but are in fact hard to approximate. Our second area of study concerns quantum proof systems. Here, an interesting question which remains open despite much effort is whether a proof system with multiple unentangled quantum provers is equal in expressive power to a proof system with a single quantum prover (i.e. is QMA(poly) equal to QMA?). Our results here study variants of this question, and include a proof that the class BellQMA(poly) collapses to QMA. We also give an alternate proof that SepQMA(m) admits perfect parallel repetition. This proof is novel in that it utilizes cone programming duality. Our final area of study concerns non-classical correlations in quantum systems. Specifically, there exist genuinely quantum correlations beyond entanglement in mixed quantum states which may prove useful from a computing and information theoretic perspective. We first explore the presence of such correlations in the locking of classical correlations and the DQC1 model of mixed-state quantum computing. Our second result introduces a novel scheme for quantifying non-classical correlations using local unitary operations. Our third result introduces a protocol through which non-classical correlations in a starting system can be “activated”' into distillable entanglement with an ancilla system. Our last result determines when the entanglement generated in the activation protocol above can be mapped back onto the starting state via entanglement swapping.