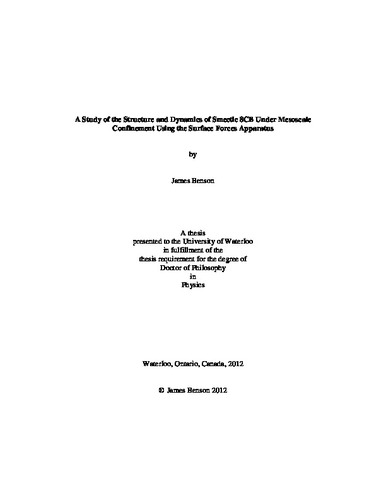 The structure and dynamics of the smectic-A liquid crystal 8CB (4 cyano-4 octylbiphenyl) when sheared and confined to mesoscale gaps (with crossed cylindrical geometry and mica confining surfaces) were studied using a Surface Forces Apparatus (SFA). Triangular shear patterns with frequencies of 0.01, 0.1, 1.0 and 10 Hz, and amplitudes of 62.5 nm, 625 nm and 6.25 m were applied to samples at gap sizes of 0.5 and 5.0 m. The study was performed at room temperature (20.5C) and at two higher temperatures (22C and 27C). In order to minimize the thermal fluctuations within the test chamber and hence to allow for the rapid re-initialization of test runs, the SFA was modified to allow for quick, precise and remote control of the confining surfaces. The procedure maximized the number of tests that could be undertaken with a single pair of surfaces so that a single gap geometry could be maintained for the duration of the test run. In order to run the SFA remotely, scripts written with a commercial software package, LabVIEW, were used to control of the SFA components, its FECO-monitoring camera and all its peripheral electronic equipment as well. Samples were agitated to disrupt any shear-induced liquid crystal domain alignment from previous testing following each shear test, and methodologies were developed to ascertain the extent of confinement quickly and remotely following agitation. Separate methods were developed for gap sizes at each extreme of the mesoscale regime, where the transition from bulklike structure and dynamics to nano-confinement occurs (between 1 and 10 microns for smectic-A 8CB). The results revealed that the greater amplitude-gap aspect ratio and surface-to-domain contact associated with smaller gaps facilitated reorientation of the domains in the shear direction. Evidence was also presented of domains at the higher end or outside of the mesoscale regime that, while straining and accreting, were unable to reorient and thereby led to an overall increase of viscoelastic response. The effective viscosity was found to obey a simple power law with respect to shear rate, , and the flow behaviour indices, n, slightly in excess of unity indicate shear thickening occurs with large enough shear amplitude, and that the viscosity reached a plateau near unity over shear rates of 0.005 to 500 s-1 within the mesoscale regime. Different K and n values were observed depending on the shear amplitude used. Unlike bulk smectic 8CB, whose domains do not align well in the shear direction with large shear-strain amplitude, at mesoscale levels of confinement large amplitude shearing (up to 12.5 shear strain amplitude) was found to be very effective at aligning domains. In general domain reorientation is found to be much more rapid within the mesoscale regime than has been reported in bulk. Aggressive shearing was found to result in a complete drop in viscoelastic response within seconds, while gentler shearing is found to produce a very gradual increase that persists for more than six hours, with individual shear periods exhibiting frequent and significant deviations from the expected smooth shear path that may be a product of discrete domain reorientations. From these findings, certain traits of the smectic 8CB domain structures under mesoscale confinement were deduced, including how they respond to shear depending on the level of confinement, and how their reorientation due to shear varies not only with shear rate but also independently with shear amplitude. An equation describing the viscosity change as a function of both shear rate and shear amplitude is proposed. The shear amplitude dependence introduces the notion of shearing beyond the proposed smectic 8CB “viscoelastic limit”, which was shown to exhibit behaviour in accordance with Large Amplitude Oscillatory Shear (LAOS) techniques developed for Fourier Transform rheology. The findings provided an understanding of the behavioural changes that occur as one reduces the level of confinement of smectic materials from bulk to nanoconfinement.

James Benson (2012). A Study of the Structure and Dynamics of Smectic 8CB Under Mesoscale Confinement. UWSpace. http://hdl.handle.net/10012/6919