An Analysis of Stated and Revealed Preference Cycling Behaviour: A Case Study of the Regional Municipality of Waterloo 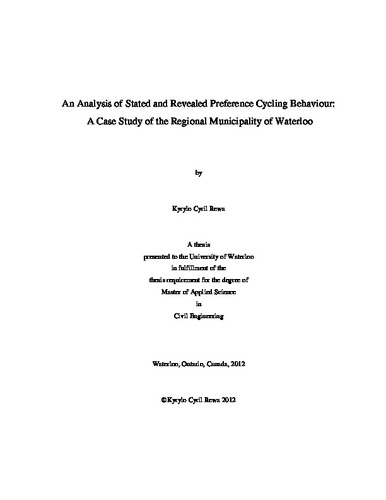 Amongst transportation professionals there is a motivation to increase the use of active transportation to achieve contemporary transportation engineering goals. This research describes a year-long GPS cycling study conducted in partnership by the University of Waterloo and the Region of Waterloo Ontario. Data were collected from 415 self-selected cyclists, using two distinct data collection mechanisms. Data collected from GPS units revealed trip origins, destinations, and routes; the data also contain time stamps from which travel speeds can be computed. An online survey was administered to gather cyclists’ socio-economic information and household composition. The survey also collected responses to questions regarding preferences for cycling infrastructure and overall satisfaction. The trip data allow for several important conclusions. The average trip length observed in the study was 6.96 kilometers; utilitarian trips (i.e. non-recreational) constitute 92% of the observed trips. This suggests that cyclists are able to complete daily activities – commuting, shopping, etc. – with less overall travel than the general population. The trip data also suggests relationships between the propensity to cycle and land use patterns. Strong positive correlations are demonstrated between higher land use density and the number of cycling trips; moreover, cycling trips tend to be more direct in areas with traditional neighbourhood design. The time at which the trips were taken – predominantly the am or pm peaks – suggest that the cyclists’ mode choice results in lowering peak demand and, therefore, reducing regional congestion. Fewer and typically shorter cycling trips were observed during winter months, presumably as a result of less favorable climate. Participants in the study are typically higher-than-average earners and mirror the overall regional age distribution, although seniors and children were underrepresented. The cyclists in the study are predominantly male which may reflect an overall higher propensity to cycle amongst men compared to women. Cyclists’ households are more likely than the general population to own fewer cars than licensed drivers which may be interpreted as a cost saving opportunities for these households. Finally, the survey data suggests that the single largest impediment to increased cycling is a perception of poor safety for cyclists, particularly in terms of interactions with automobiles.

Kyrylo Cyril Rewa (2012). An Analysis of Stated and Revealed Preference Cycling Behaviour: A Case Study of the Regional Municipality of Waterloo. UWSpace. http://hdl.handle.net/10012/6910