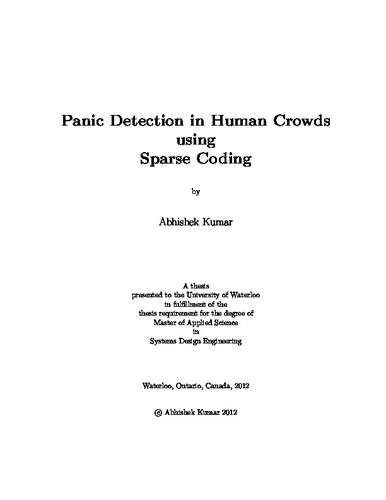 Recently, the surveillance of human activities has drawn a lot of attention from the research community and the camera based surveillance is being tried with the aid of computers. Cameras are being used extensively for surveilling human activities; however, placing cameras and transmitting visual data is not the end of a surveillance system. Surveillance needs to detect abnormal or unwanted activities. Such abnormal activities are very infrequent as compared to regular activities. At present, surveillance is done manually, where the job of operators is to watch a set of surveillance video screens to discover an abnormal event. This is expensive and prone to error. The limitation of these surveillance systems can be effectively removed if an automated anomaly detection system is designed. With powerful computers, computer vision is being seen as a panacea for surveillance. A computer vision aided anomaly detection system will enable the selection of those video frames which contain an anomaly, and only those selected frames will be used for manual verifications. A panic is a type of anomaly in a human crowd, which appears when a group of people start to move faster than the usual speed. Such situations can arise due to a fearsome activity near a crowd such as fight, robbery, riot, etc. A variety of computer vision based algorithms have been developed to detect panic in human crowds, however, most of the proposed algorithms are computationally expensive and hence too slow to be real-time. Dictionary learning is a robust tool to model a behaviour in terms of the linear combination of dictionary elements. A few panic detection algorithms have shown high accuracy using the dictionary learning method; however, the dictionary learning approach is computationally expensive. Orthogonal matching pursuit (OMP) is an inexpensive way to model a behaviour using dictionary elements and in this research OMP is used to design a panic detection algorithm. The proposed algorithm has been tested on two datasets and results are found to be comparable to state-of-the-art algorithms.