The study of corrosion behaviour of Al, Cu and Zn in some commercial beverages by chemical and electrochemical 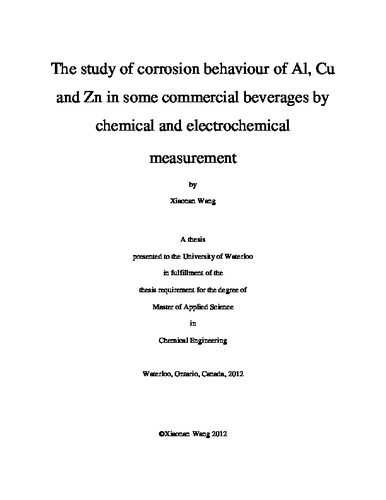 The corrosion behaviour of pure copper, zinc and aluminum in selected commercial beverages was studied. Experiments were also conducted in the presence of citric and phosphoric acid to investigate their role in the corrosion process in these beverages. Two experimental approaches were used to investigate the corrosion behavior: a chemical method in which the dissolved metal concentration was measured after immersion of a sample in a beverage and an electrochemical method using the Tafel extrapolation technique. The metal surfaces were also examined by SEM/EDX after the immersion tests and electrochemical polarization. Among the important conclusions from this research are that the order in which the various beverages affect the corrosion rate as evaluated by Tafel extrapolation of the polarization curves did not agree with the order based on measurement of the dissolved metal concentration as determined by the immersion tests except when a 1- day immersion test was used for Al. The dissolved Al, Zn and Cu concentrations obtained from short-term immersion tests differed from those measured in long-term tests, although the same ranking of the corrosiveness of the seven soft drinks was obtained after 1- and 3- day immersion tests. These discrepancies likely stem from the complicated dynamics of the corrosion of these metals and the various physical, chemical and electrochemical processes that take place in these beverages. No simple correlation was found between the beverage properties and composition and the dissolved copper, zinc and aluminum concentrations after immersion, whether based on short-term or long-term tests. However, the corrosion rate of copper in the 7 soft drinks as determined by the Tafel extrapolation method was found to depend on the pH. Uniform corrosion was observed in all iv cases except for Al immersed in Gatorade. Pitting cavities were observed on the surface of Al after both the 5-day immersion test and Tafel polarization measurements. Of the beverages considered in this study, Gatorade was consistently found to be the most corrosive for the three test metals.

Xiaonan Wang (2012). The study of corrosion behaviour of Al, Cu and Zn in some commercial beverages by chemical and electrochemical. UWSpace. http://hdl.handle.net/10012/6905