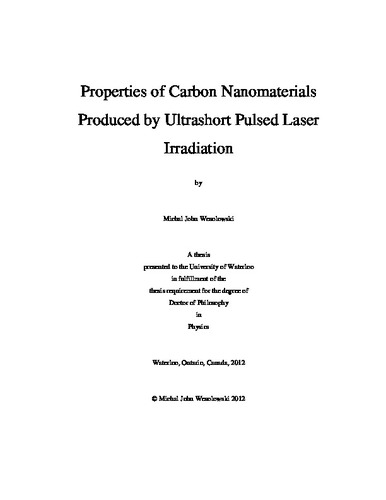 Two synthesis pathways were employed throughout this work to create a variety of unique carbon materials. The first of these routes involves the photo-dissociation of liquids by direct irradiation with ultrashort laser pulses; while the second entails the bombardment of polycrystalline chemical layers by a pulsed laser induced carbon plasma. The pulsed laser irradiation (PLI) of liquid benzene (C6H6) was found to result in the formation of amorphous carbon nanoparticles consisting of clusters of sp2-bonded aromatic rings bridged by sp hybridized polyyne functionalities. In a complimentary experiment, liquid toluene (C6H5CH3) was irradiated under similar conditions leading to the synthesis of a series of free floating methyl capped polyynes, with chain lengths ranging from C10 – C20. The synthesis of polyynes is an active and cutting edge topic in material science and chemistry. In a more complex experiment, solutions of ferrocene and benzene were irradiated by fs-laser pulses resulting in highly ordered mesoscale structures exhibiting four unique geometries; ribbons, loops, tubes, and hollow spherical shells. After a purification process, the higher order structures were destroyed and replaced with nanoparticles consisting of three distinct species including; pure iron, and two phases in which part of the ferrocene molecule was bound to either carbon or iron/carbon complexes. This material is extremely interesting because it exhibits properties similar to that of an electret and is also ferromagnetic over a large temperature range. In the final liquid phase laser irradiation experiment, a new hybrid deposition technique was originated and used to coat stainless steel electrodes with disordered mesoporous nanocrystalline graphite. This method involves the laser induced breakdown of benzene and the subsequent electrodeposition of the resulting carbon ions. Another focus in this work involved the synthesis of a special class of polymer-like carbon nanomaterials using a new method that augments traditional pulsed laser deposition. This technique involves the plasma processing of frozen materials with a pulsed laser initiated graphitic plasma. We call this technique "pulsed laser induced plasma processing" or "PLIPP". Various thin film compositions were created by processing alkane and alkene ices. Finally, in a slight departure from the previous experiments, the effects of carbon ion bombardment on water ice were examined in an effort to understand certain astrophysical processes.