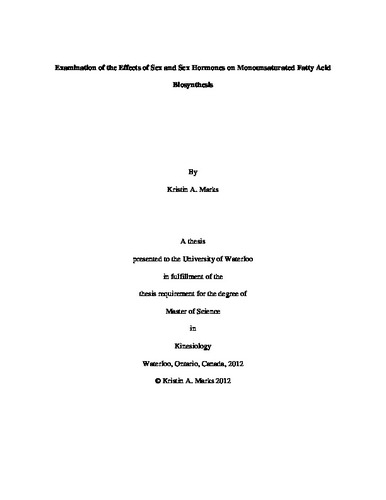 Monounsaturated fatty acids (MUFA) have been viewed as either beneficial or neutral with respect to health; however, recent evidence suggests that MUFA may be associated with obesity and cardiovascular disease. Sex differences in MUFA composition have been reported in both rats and humans that may be mediated by sex hormones. Therefore, differences in fatty acid and enzyme expression were examined in male and female rats. HepG2 cells treated with 17β-estradiol, progesterone and testosterone (0, 10, 30 and 100 nM), and ovariectomized female rats with hormone implants (sham, no treatment, estradiol, progesterone, and estradiol plus progesterone) examined the role of sex hormones in MUFA metabolism. MUFA concentrations were determined by gas chromatography. The mRNA and protein expression of stearoyl-CoA desaturase and elongase 6, key enzymes involved in MUFA biosynthesis, were measured by real-time PCR and immunoblotting, respectively. Elongase 6 protein expression was higher in females as compared with males, increased with estradiol and progesterone treatment of HepG2 cells, and was higher in ovariectomized rats treated with estradiol. Elongase 6 expression was also decreased in HepG2 cells treated with testosterone. In contrast, the expression of stearoyl-CoA desaturase did not appear to be associated with sex or sex hormones in HepG2 cells, although ovariectomized rats treated with estradiol plus progesterone had increased stearoyl-CoA desaturase protein levels compared with sham controls. Sex differences and differences after hormonal treatments were observed in the fatty acid concentrations of MUFA and immediate MUFA substrates including 16:0, 16:1n-7, 18:0, 18:1n-7 and 18:1n-9. These differences in MUFA are consistent with the changes in elongase 6 expression. The effect of sex and hormone status on elongase 6 has not been previously examined, but these results suggest elongase 6 is an important factor in determining MUFA composition. These sex and hormonal differences in MUFA composition may contribute to sex differences in obesity and cardiovascular disease. Further work examining other factors involved in MUFA composition including oxidation, synthesis of complex lipids and the effect of diet is required.