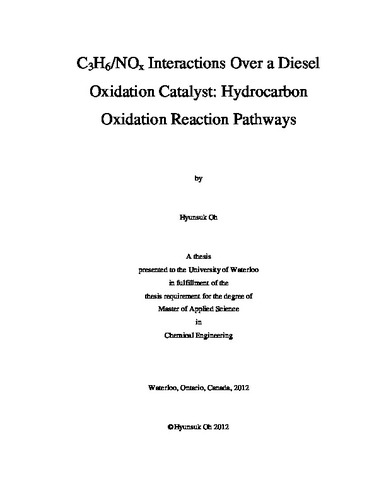 C3H6 oxidation over a Pt/Al2O3 catalyst with or without NOx present was investigated. In particular, its reaction mechanism was studied using diffuse reflectance infrared spectroscopy (DRIFTS), a reactor system designed for monolith-supported catalysts and a micro-reactor system designed for powder catalysts referred to as CATLAB. These experiments reveal that C3H6 oxidation is inhibited by the presence of NO, NO oxidation is inhibited by the presence of CeH6, and that adsorbed NOx can react with gas phase C3H6. DRIFTS and CATLAB results confirm the reaction between C3H6 and nitrates, which are formed during NOx adsorption, with linear nitrites observed as reaction products. Therefore, a reaction route is proposed for C3H6 oxidation in the presence of NOx, namely, nitrates acting as oxidants. Using NO2 instead of NO, or using a high NOx/C3H6 ratio, which is beneficial for nitrate formation, favors this reaction pathway. Data also showed that Pt is required for this reaction, which suggests the nitrates in proximity to the Pt particles are affected/relevant. Reaction kinetics studies of C3H6 oxidation over Pt/Al2O3 and Pt/SiO2 catalysts were performed in CATLAB using a temperature-programmed oxidation method with different oxidants: O2, NO2 and nitrates. The reaction kinetics of these possible reactions were compared in order to determine which reaction is more important. NOx adsorption does not occur on the SiO2 surface so the reaction between C3H6 and NO2 could be isolated and the effect of nitrates could be observed as well when compared to the results from Pt/Al2O3. The Pt dispersions were determined using H2 chemisorption and were 1.3 and 1.6% for Pt/Al2O3 and Pt/SiO2, respectively. C3H6 oxidation starts at a lower temperature with O2 than with NO2 but the activation energy was lower with NO2. This gives indication that hydrocarbons must be activated first for NO2 to be favored in hydrocarbon oxidation. When the experiment was done with C3H6 and nitrates, the reaction did not occur until NOx started to desorb from the catalyst at higher temperatures, when nitrates become unstable and decompose. Therefore, O2 was added to the system and the reaction began at even lower temperature than with just C3H6 and O2. This proved that hydrocarbons need to be activated in order for surface nitrates to affect C3H6 oxidation and this reaction also resulted in a lower activation energy than with just C3H6 and O2. Nitrate consumption was also observed as less NOx desorbed from the catalyst at the later stage of the temperature ramp compared to the amount desorbed when the catalyst was not exposed to C3H6.