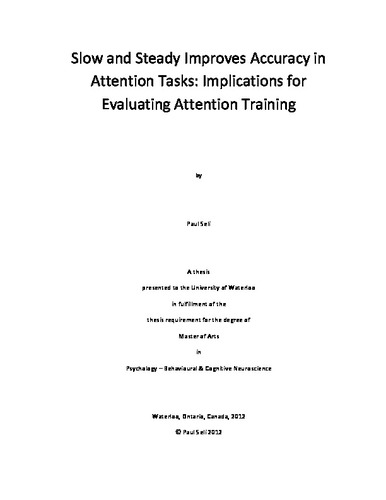 There have been increased efforts to develop methods for improving attention across a range of tasks including those assessing sustained attention. Using a variety of techniques, researchers have reported modest reductions in errors on sustained attention tasks. However, published reports often have not documented changes in response times (RTs) that might accompany error reductions, which is problematic given that the error reductions could be mediated by a slowing strategy (i.e., speed-accuracy trade-off). In three studies, I explored the effects of speed-accuracy trade-offs in a sustained attention task (The Sustained Attention to Response Task; SART). In Study 1, I examined the effects of changing SART instructions from the double-edged "be fast and accurate" to the more conceptually accurate goal of maintaining high accuracy by responding slowly and carefully, and found that instructions to respond slowly and accurately resulted in both significantly longer RTs and fewer SART errors. In Studies 2 and 3, I developed a modified version of the SART that allowed me to experimentally manipulate RTs and found that errors were a systematic function of manipulated differences in RT independent of individual differences in response strategies. The results of these experiments indicate that it is possible that any technique that alters RT might indirectly alter error rates independently of improvements in sustained attention. I therefore conclude that investigators need to carefully attend to, control for, and report any changes in RT that accompany improvements in accuracy of performance, or alternatively employ tasks controlling for RT.