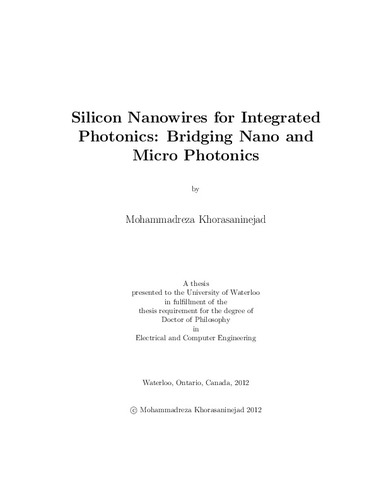 Silicon Nanowires (SiNWs) with ability to confine carriers and photons in two directions while allowing propagation in third dimension offer interesting modified optical properties such as increased material absorption and optical non-linearities with regard to that of bulk silicon. Enhanced optical properties in SiNWs open a window not only to improve the performance of existing devices but also to realize novel structures. As such, I chose to investigate SiNWs for their applications in photonics, especially for sensing and non-linear devices. My goal was to conduct fundamental research on the optical properties of these SiNWs, and then develop an integration platform to realize practical devices. The platform should be compatible with IC manufacturing. Electron Beam Lithography (EBL) using a Poly Methyl Methacrylate (PMMA) resist followed by Inductively Coupled Plasma Reactive Ion Etching (ICP-RIE) is used for SiNWs fabrication. Now we are able to fabricate nanowires as small as 15 nm in diameter with the smallest separation of 50 nm. In addition, the interface between SiNWs and Si substrate is optically smooth enabling us to fundamentally understand optical properties of these structures. During the course of this project, I have contributed new fundamental knowledge about SiNWs. For example, Second Harmonic Generation (SHG) is demonstrated in SiNWs, which is absent in bulk silicon. This is achieved by self-straining the nanowires and is the first demonstration of this kind. Second-order non-linearities are more efficient for optical signal processing than third-order ones (which have been used for silicon photonics devices so far). Therefore, these results open a new area of research in silicon. In addition to second order nonlinearity, high enhancement of Raman scattering is achieved in SiNWs fabricated on Silicon on Insulator (SOI) substrate. This can find promising applications in sensing and nonlinear based devices such as optical switches and logic gates. Further, polarization resolved reflections from these nanowire arrays were measured and significant differences were observed for the reflection characteristics for the sand p-polarized beams. In order to understand these reflections, an effective index model is proposed based on calculations using Finite Difference Time Domain (FDTD) method. Results of this analysis provide useful information for designing of many optical devices using SiNWs such as solar cells and photodetectors. As another part of this thesis, vivid colors in mutually coupled SiNWs is demonstrated where nanowire diameters range from 105 nm to 345 nm. A simple sensor is demonstrated by observing the change in the reflected color with changing refractive index of the surrounding medium. A refractive index resolution of 5×10−5 is achieved using a simple charge coupled device (CCD) camera. Although, there were some paradigm shifting results during my fundamental studies, it became very apparent that SiNWs suffer from a major issue inhibiting their use in photonics devices. Below the diameter of 100 nm where these enhanced material properties were observed, SiNW is a poor optical waveguide with less than 1 % of light confined. The low confinement factor means that though the intrinsic properties of SiNWs increase, the overall device performance is not significantly enhanced. To overcome this issue, a new platform technology is invented, called Silicon Nanowire Optical Waveguide (SNOW). It combines the material advantages of nanostructures with the optical properties of conventional waveguides, and consists of arrays of nanowires in close proximity. It is shown that such a structure can guide an optical mode using the FDTD method. This waveguide structure can be used as a versatile platform to manufacture various devices such as sensors, switches, modulators, grating, and delay lines. For instance, a novel bio-sensor is proposed and designed whose sensitivity is enhanced by a factor of 20, compared to conventional silicon-wire waveguides.