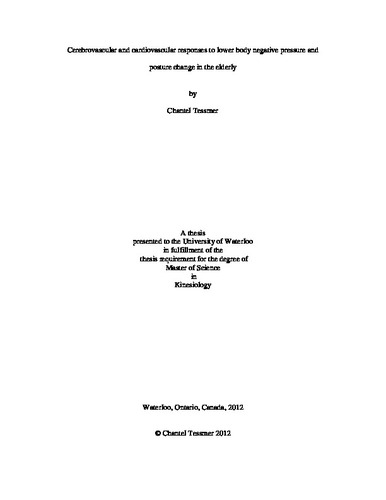 Lower body negative pressure (LBNP) is frequently used in the research setting as a means to induce orthostatic stress. This tool is applicable to typical movements during daily living only if the associated responses are comparable to those of actual posture change. The purpose of this project was to investigate the correspondence between these two conditions in a group of elders with mean age of 74 ± 2 years. The primary hypothesis predicted very similar physiologic responses between LBNP and posture change. During LBNP, orthostatic stress was sufficient to reduce stroke volume (SV; p=0.0097), which was related to splanchnic pooling (r=-0.833; p=0.0020). Diastolic cerebral blood flow velocity (CBFV) was directly related to central venous pressure (r=0.683; p=0.0360), strengthening the notion that an important determinant of CBFV during LBNP is incoming pulsatile flow into the cerebral circulation. This is in contrast to what occurred during posture change (p=0.0355), where diastolic CBFV decreased significantly (p=0.0288) and was directly related to diastolic blood pressure (DBP; p=0.0427), highlighting the role of cerebral perfusion pressure (CPP) in maintenance of CBFV particularly during upright posture. In both conditions, DBP was related to cardiac output (Q) and total peripheral resistance (TPR). The relative heart rate (HR) response was higher during posture change than during LBNP (p=0.0397), suggesting that a negative pressure of up to 40 mmHg may not be adequate to elicit the same HR responses as true orthostasis in this elderly population. Contrary to the initial hypothesis, the HR and diastolic CBFV responses were different between the two conditions. Importantly, the results of this study support that in response to both actual orthostasis and simulated orthostasis, elderly persons experienced a drop in CBFV, but for different fundamental reasons, which were directly attributable to distinctions in the effects of gravity during the two postures. Recognizing the mechanistic differences in cerebro- and cardiovascular responses between true and simulated orthostasis is essential, and in this elderly population, there were important differences to consider.