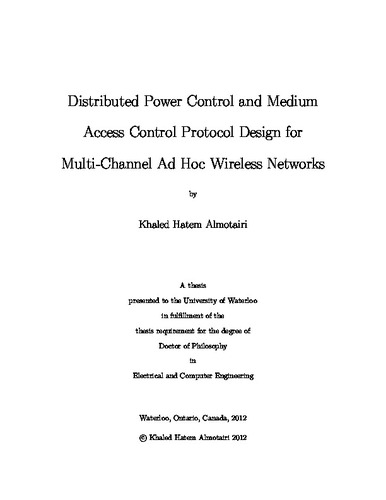 In the past decade, the development of wireless communication technologies has made the use of the Internet ubiquitous. With the increasing number of new inventions and applications using wireless communication, more interference is introduced among wireless devices that results in limiting the capacity of wireless networks. Many approaches have been proposed to improve the capacity. One approach is to exploit multiple channels by allowing concurrent transmissions, and therefore it can provide high capacity. Many available, license-exempt, and non-overlapping channels are the main advantages of using this approach. Another approach that increases the network capacity is to adjust the transmission power; hence, it reduces interference among devices and increases the spatial reuse. Integrating both approaches provides further capacity. However, without careful transmission power control (TPC) design, the network performance is limited. The first part of this thesis tackles the integration to efficiently use multiple channels with an effective TPC design in a distributed manner. We examine the deficiency of uncontrolled asymmetrical transmission power in multi-channel ad hoc wireless networks. To overcome this deficiency, we propose a novel distributed transmission power control protocol called the distributed power level (DPL) protocol for multi-channel ad hoc wireless networks. DPL allocates different maximum allowable power values to different channels so that the nodes that require higher transmission power are separated from interfering with the nodes that require lower transmission power. As a result, nodes select their channels based on their minimum required transmission power to reduce interference over the channels. We also introduce two TPC modes for the DPL protocol: symmetrical and asymmetrical. For the symmetrical mode, nodes transmit at the power that has been assigned to the selected channel, thereby creating symmetrical links over any channel. The asymmetrical mode, on the other hand, allows nodes to transmit at a power that can be lower than or equal to the power assigned to the selected channel. In the second part of this thesis, we propose the multi-channel MAC protocol with hopping reservation (MMAC-HR) for multi-hop ad hoc networks to overcome the multi-channel exposed terminal problem, which leads to poor channel utilization over multiple channels. The proposed protocol is distributed, does not require clock synchronization, and fully supports broadcasting information. In addition, MMAC-HR does not require nodes to monitor the control channel in order to determine whether or not data channels are idle; instead, MMAC-HR employs carrier sensing and independent slow channel hopping without exchanging information to reduce the overhead. In the last part of this thesis, a novel multi-channel MAC protocol is developed without requiring any change to the IEEE 802.11 standard known as the dynamic switching protocol (DSP) based on the parallel rendezvous approach. DSP utilizes the available channels by allowing multiple transmissions at the same time and avoids congestion because it does not need a dedicated control channel and enables nodes dynamically switch among channels. Specifically, DSP employs two half-duplex interfaces: One interface follows fast hopping and the other one follows slow hopping. The fast hopping interface is used primarily for transmission and the slow hopping interface is used generally for reception. Moreover, the slow hopping interface never deviates from its default hopping sequence to avoid the busy receiver problem. Under single-hop ad hoc environments, an analytical model is developed and validated. The maximum saturation throughput and theoretical throughput upper limit of the proposed protocol are also obtained.