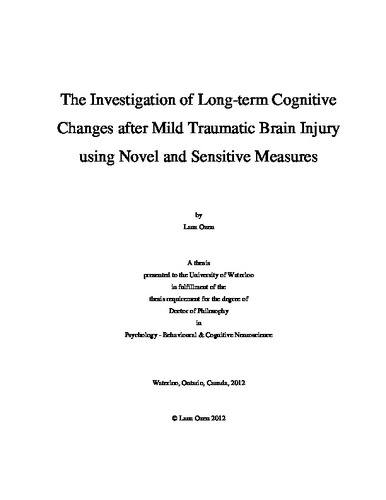 Memory and concentration problems are frequently reported long after experiencing a mild traumatic brain injury (mild TBI), though conflict with null findings of deficits on standard neuropsychological tests. Experimental research shows that these inconsistencies are, in part, due to the simplicity of neuropsychological tests. As well, past research suggests that when neuropsychological deficits are occasionally detected within this population, they could be influenced by diagnosis threat: an expectation bias for impaired performance when individuals are merely informed that cognitive problems may be experienced following a mild TBI. The main goal of this thesis was to specify the long-term cognitive effects of mild TBI, with the prediction that, while cognitive complaints may be over-reported due to diagnosis threat, significant deficits can be detected using sensitive measures in experimental paradigms. Experiment 1 sought to document whether diagnosis threat influenced self-report of everyday attention and memory problems and neuropsychological task performance in individuals with a remote history of mild TBI. We found that undergraduate students with a mild TBI were significantly more likely to report having attention and memory failures in their daily lives when exposed to diagnosis threat, compared to undergraduate students not exposed to diagnosis threat. These findings call into question the efficacy of using of self-report measures to identify long-term cognitive deficits following a mild TBI. In an attempt to further specify persistent significant cognitive deficits, we designed two different experimental paradigms that uniquely manipulated the demand place on executive processes, as past research suggested deficits emerge only when tasks require considerable cognitive resources. In Experiment 2a, we manipulated processing load on a visual working memory task, across two conditions, while also limiting the potential effect of diagnosis threat. While self-report and neuropsychological measures of attention and memory did not differentiate the groups, the mild TBI group took significantly longer to accurately detect repeated targets on our working memory task. Accuracy was comparable in the low-load condition and, unexpectedly, mild TBI performance surpassed that of controls in the high-load condition. Temporal analysis of target identification suggested a strategy difference between groups: mild TBI participants made a significantly greater number of accurate responses following the target’s offset, and significantly fewer erroneous distracter responses prior to target onset, compared to controls. In Experiment 2b we also examined whether manipulating executive processing demands would differentiate mild TBI from controls, this time on a routine action task that required participants to learn a sequence of hand movements to targets. While not significant, we found a trend such that mild TBI participants were slower to respond on trials with a large executive demand compared controls, while no differences were found on trials with relatively low executive requirements. Results from Experiments 2a and 2b provide stronger evidence for mild TBI-related slowing during a working memory task with an executive component compared to a skilled action task that also had an executive component, but placed minimal demand on memory. To more precisely identify the brain basis of this cognitive slowing, in Experiment 3 we administered a visual n-back task in which we systematically increased working memory demands from 0- to 3-item loads. We found that, compared to controls, mild TBI participants showed a reduction in P300 amplitude, conceptualized as an index of available cognitive resources for stimulus classification. While no late stage response differences were found between groups, P300 amplitude was negatively correlated with response times at higher loads in both control and mild TBI participants. Findings suggest that high functioning young adults who sustained a mild TBI in their remote past, have a reduced amount, or inefficient recruitment of, cognitive resources for target detection; a potential mechanism underlying mild TBI-related response slowing on tasks that place a heavy demand on processing resources. Similar to the effects of mild TBI, aging is also known to negatively impact cognition. In Experiment 4, we examined whether TBI-related deficits persist into older adulthood, and compound the negative effect of aging on cognition. We administered the same working memory task as in Experiment 2a, along with a variety of neuropsychological tests in order to investigate the effect of a TBI sustained an average of 50 years in the past. While no group differences emerged on our experimental working memory task, older adults with a history of 1 or 2 TBIs performed significantly worse than non head-injured older adults only on neuropsychological measures of attention that had an executive component. Such results suggest that a remote TBI sustained early in life further compounds normal age-related cognitive decline. Together, these experiments help specify the measures that best detect long lasting cognitive changes following TBI. Particularly, our findings provide a potential explanation for why long-term cognitive deficits are difficult to identify in the young mild TBI population: the majority of neuropsychological tests are insensitive to minor changes in information processing speed and, as a result, the execution of slowing strategies to maintain accuracy may go undetected. Our findings also demonstrate the importance of investigating longer-term effects of TBI, as they may be chronic and impact cognitive task performance in old age, amplifying normal age-related cognitive deficits.