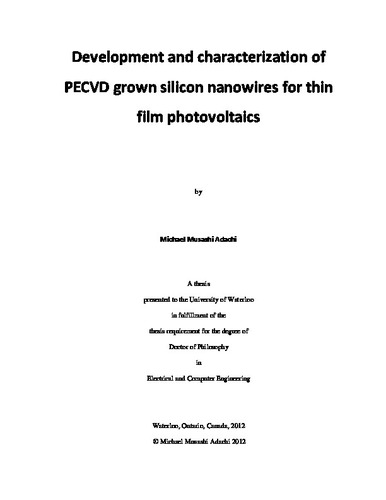 Nanowires are high aspect ratio nanostructures with structural diameters on the order of nanometers to hundreds of nanometers. In this work, the optical properties of highly crystalline silicon nanowires grown by the Vapor-Liquid-Solid (VLS) method surrounded by a thin silicon shell are investigated for thin film solar cell applications. Crystalline core nanowires were surrounded by a conformal amorphous silicon shell and exhibited extremely high absorption of 95% at short wavelengths (λ<550nm) and very low absorption of <2% at long wavelengths (λ>780nm). Nanowires were disordered with average lengths ranging from 1.3 to 2.3 μm. The absorption increased at longer wavelengths as a function of amorphous shell radial thickness, significantly higher than the absorption of a reference planar a-Si thin film. In addition, a new method to grow epitaxial silicon at low growth temperatures on glass substrates is demonstrated. Highly crystalline silicon nanowires with an average length of 800 nm were used as the seed crystal to grow an epitaxial silicon shell around, using a low temperature process. The nanowire core was grown at 400°C, and the shell was grown at about 150°C. Such epitaxial grown nanowire shells could be used as a building block for nanotechnology applications in which epitaxial silicon is required over large-area substrates such as glass. Furthermore, the epitaxial silicon shell nanowires exhibited absorption > 90% up to a wavelength of 600 nm, which was significantly higher than that of a planar 1 μm nanocrystalline silicon film. The high absorption exhibited by nanowires with both amorphous and crystalline silicon shells makes them promising for use in photovoltaic and photodetector applications. Silicon nanowires were incorporated into thin film silicon n-i-p solar cells in two configurations: as a nanostructured back reflector, and in core-shell nanowire solar cells. First, domed-shaped nanostructures were fabricated by coating an array of silicon nanowires with a thick layer of amorphous silicon. After the nanostructures were coated with Ag and ZnO:Al, they were used as the backreflector in an n-i-p amorphous silicon solar cell. The nanostructured backreflector improved light scattering within the solar cell, leading to a short circuit current of 14.8mA/cm2, a 13% improvement over that of the planar device, which had a Jsc=13.1 mA/cm2. The overall conversion efficiency of nanostructured backreflector device was η = 8.87%, a strong improvement over that of the planar device (η = 7.47%). Silicon nanowires were also incorporated into core-shell nanowire solar cells. The first device architecture investigated consisted of nanowires incorporated as the intrinsic absorption layer between a planar n+ layer and conformal p+ layer. However, the fabricated devices exhibited very low collection efficiencies of < 2% due to the presence of impurities incorporated by the catalyst used during nanowire growth. As a result, the device architecture was modified such that the nanowires provided high aspect ratio structure to enhance absorption in a shell material, but the nanowires themselves were not used as an active device component. Nanowire core-amorphous silicon shell solar cells, on average 525 nm long and about 350nm in total diameter, exhibited an impressive low total reflectance of <3% in the wavelength interval of 410 nm < λ < 640nm and exceeded 10% only for λ>700 nm. As a result, the core-shell nanowire devices exhibited enhancement in quantum efficiency at low wavelengths, λ < 500nm and high wavelengths, λ > 600nm as compared to a planar device. The resulting short circuit current was 14.1 mA/cm2 compared to 12.3 mA/cm2 for the planar device, an improvement of ~15%. Nanowire core- nanocrystalline silicon shell solar cells were also fabricated using the same device architecture. Core-shell nanowires with an average length of 800 nm showed significant enhancement in quantum efficiency over all wavelengths as compared to a 1 μm thick planar solar cell. The core-shell nanowire device had a short-circuit current of 16.2 mA/cm2 , a ~25% improvement over that of the planar thin film solar cell (Jsc=13.0 mA/cm2). Core-shell nanowire devices did, however, have lower open circuit voltage compared to the planar device. Non-conformal coverage was found to be a limiting factor in device performance, but further improvements can be expected with optimization of the n-i-p deposition conditions and nanowire density.