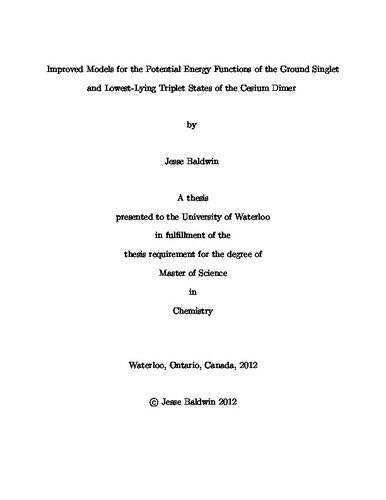 The Morse/Long Range (MLR) potential has become one of the most reliable and highly used potential energy functions for diatomic molecules. It includes the theoretical long range behaviour that diatomic molecules are known to exhibit as they approach the dissociation limit. Heavy alkali metals with adjacent electronic states often exhibit strong coupling between the spin and orbital angular momentum. The ground state X¹Σg⁺ and the lowest lying triplet state aᶟΣᵤ⁺ of Cs₂ exhibit such coupling effects and as a result, modeling the highest vibrational states of these states is a non-trivial problem. Utilizing scattering length values obtained from published analysis of 60 Feshbach resonances, the correct form of the potential energy function was determined. Moreover, the scattering length values were used to determine the correct leading dispersion coefficient that describes the true form of the long-range potential energy functions. All previous attempts to determine global potential energy functions for these states have considered only the optical spectroscopic data. This is the first ever effort attempting to use scattering lengths determined from cold atom collision experiments in a combined analysis with conventional spectroscopic data.

Jesse Baldwin (2012). Improved Models for the Potential Energy Functions of the Ground Singlet and Lowest-Lying Triplet States of the Cesium Dimer. UWSpace. http://hdl.handle.net/10012/6872